Attack was 'revenge' for earlier killings

Rangae police station chief Surapong Chartsut had the closest of close calls, when a bullet nicked his ear during the attack. (Photos by Waedao Harai)

Narathiwat: One police officer was killed and five others wounded in a drive-by shooting attack Thursday at Rangae district police station while officers were assembled together outdoors.

Four to five attackers travelling in the cargo tray of a silver Toyota Revo pickup drove slowly past the station about 8.50am. The assailants opened fire at about 30 police who were standing in rows, in the middle of their morning briefing in the yard inside the gates.

Police later raided two locations in Muang district, resulting in two suspects being taken into in custody at Rangae station.

Security authorities were continuing to check surveillance cameras and search for the other suspects.

Witnesses said the gunmen were dressed like construction workers. They fired assault rifles at the police who were being briefed on their duties by station chief Surapong Chartsut.

A policeman on duty at the gate fired back at the pickup prompting the attackers to flee. They scattered spikes on the road behind them as they drove off to deter pursuit. Police found about 30 spent shells from M16 and HK assault rifles on the road afterwards. 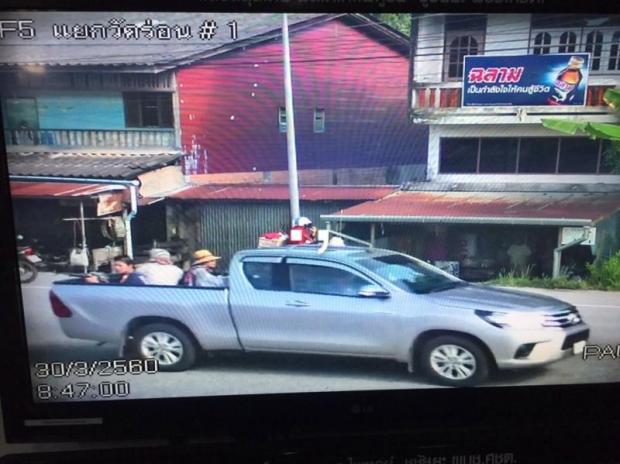 The suspects head into town, disguised as construction workers, riding in a stolen pickup truck and caught by a CCTV camera.

From surveillance camera footage, police determined the pickup was stolen in Sukhirin district prior to the attack.

According to a source, an unnamed couple in a pickup were stopped by a group of people pretending to be security officials at a fake security checkpoint set up in an area between tambon Phadung Mat in Chanae district and tambon Rom Sai in Sukhirin district.

The two were taken by the fake security officials and locked inside a deserted house nearby, the source said.

The couple later lodged a complaint with police about the theft of the pickup, police said, adding the truck was later proved to be the same as the one caught on security cameras being used by the police station attackers.

A security source said the station attack was apparently an act of revenge against the authorities over the extra-judicial killings of Isma-ae Hama, 28, and Arseng Useng, 30, in Rueso district on Wednesday afternoon.

The two were believed to be among the people behind the killing of Somchai Thongjan, an assistant village head of Ban Si Phinyo in Rueso district and three members of his family, the source said.

He confirmed the motive of Thursday's attack was retaliation for the killing of the two suspects.

The two were killed during a gun battle with a combined security force that erupted after the driver of a pickup they were travelling in refused to stop at a security checkpoint.

The suspects in the truck who opened fire at the authorities were believed to be Runda Kumpulan Kecil rebels, the source said.

Deputy police chief Pol Gen Srivara Ransibrahmanakul later confirmed the motive behind the police station attack. He also said the faces of some suspects were caught on security cameras and a check of their records showed no matches with any criminal suspects in the police database.