Residents of the southern provinces have been warned to brace for possible heavy rain from today until Wednesday while thundershowers and gusty winds will prevail in the North, the Central Plains and the East.

In its forecast on Saturday, the Meteorology Department said summer thunderstorms ware likely to weaken in the upper part of the country. However, thundershowers and high winds are possible in the North, Central and the East during this period.  Heavy rains are expected in several southern provinces.

A section of Pattaya Sai 3 Road at the Mum Aroi intersection, which is prone to flooding due to its pan shape, was under almost one metre of water, making it impassable for cars and motorcycles. Authorities closed the route and told motorists to use other routes.

In Uttaradit, summer storms and high winds pounded several areas early Saturday morning. Storms uprooted some roadside trees in Laplae and Muang districts in the northern province. A large tent set up for an upcoming Songkran event in tambon Sri Phanommas in Laplae district also collapsed during the storm. 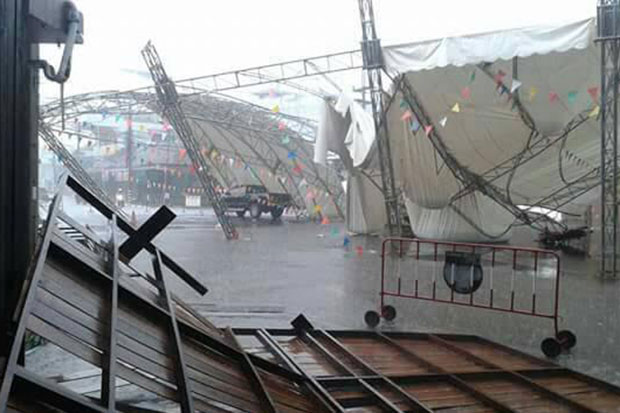 A large tent set up for an upcoming Songkran event in tambon Sri Phanommas in Laplae district, Uttaradit collapses during a summer storm on Saturday. (Photo by Boonnam Kerdkaew)