The planned fifth generation (5G) licence auction on the 2600-megahertz spectrum is likely to be put off to 2018 due to a lack of well-designed frequency valuation principles and the transition to a new telecom regulatory body.

The National Broadcasting and Telecommunications Commission (NBTC) initially planned to auction 80MHZ of bandwidth on the 2600MHz spectrum in September this year. The spectrum is currently licensed to MCOT Plc.

Prawit Leesathapornwongsa, an NBTC commissioner, said the postponement would inevitably cause a delay in the country's 5G wireless network developments as 2600MHz is the most compatible band for 5G technology.

He said the NBTC has not yet started to develop a valuation process for the 2600MHz spectrum.

MCOT now holds a total of 190MHz of bandwidth on the 2600MHz spectrum, which it has not used over the past decade.

The state broadcasting enterprise told the NBTC last year it wanted to return 80MHz of bandwidth of the 190MHz total to the NBTC for its auctions. MCOT said it expects compensation in line with the new NBTC draft bill. The bill is expected to come into effect by May this year.

The NBTC is currently not authorised to pay compensation to state agencies in return for frequencies, but the new NBTC draft bill will allow the regulator to compensate state agencies that return spectrum, leading to a better arrangement of spectrum slots.

"I strongly believe that the planned auction of 2600MHz spectrum will not be able to take place in 2017 as scheduled," said Mr Prawit.

The process of setting compensation for MCOT will take time, he said.

To keep the auction schedule for 2018, Mr Prawit urged the NBTC's management commissioners to start evaluating the 2600MHz spectrum on a per MHz basis.

The new NBTC draft bill has yet to identify methodologies for calculating compensation.

Mr Prawit said there are two possible options for evaluating MCOT compensation: a fixed-rate compensation payment or paying by the percentage of the bid-winning prices.

He also said the transition to a new NBTC is likely to impact the auction process because the current NBTC commissioners will end their working term in October this year.

"We're not sure if the government will allow the current NBTC commissioners to handle the 2600MHz auction after the new NBTC bill is put into effect," he said, adding that these factors could lead to a delay.

Scott Minehane, a consultant at the International Telecommunication Union, said at a recent seminar entitled "Unlocking 5G Spectrum Towards Sustainable Thailand 4.0" that the country still lacked a clear roadmap for mobile spectrum planning and usage.

All telecom operators in Thailand provide telecom service through a combined 420MHz of downlink and uplink bandwidth from a variety of spectrum ranges.

Mr Minehane urged policymakers in Thailand to set up a spectrum fund to buy out underused frequencies from the frequency holders.

While the unofficial target date to possibly begin to auction 5G spectrum is now likely to be 2018, there is no roadmap to actually develop, test and field the incredibly fast service for Thailand.

UK telecoms regulator Ofcom announced in February it will hold a 5G spectrum auction this year, while the US is halfway through its auction process. Cambodia held its 2600MHz auction last December.

South Korea will have "some 5G" services for next year's Winter Olympics while 5G MegaFon will start in Russia for the World Cup 2018. Japan excepts to use 5G for all video services during the 2020 Olympics.

China's ZTE already has begun selling the 5G-capable Gigabit phone - the first in the world - as the country expects to launch actual 5G commercial service by 2019, as does France. 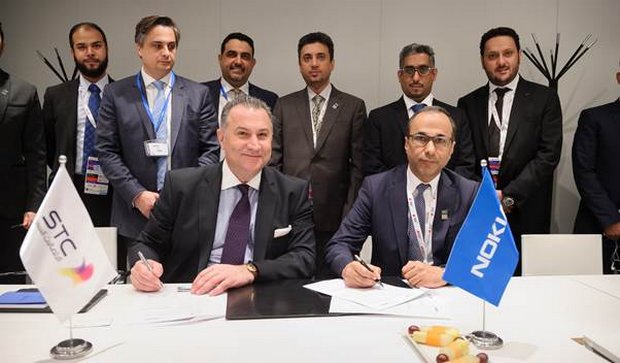 Samih Elhage of Nokia (left) and Nasser Al-Nasser of the Saudi Telecom Company (STC) signed a Memorandum of Understanding (MoU) on Feb 7 to develop 5G services in Saudi Arabia. (Photo via Nokia.com)

In the US, France, India and Brazil, governments use their spectrum funds to increase the availability of frequencies in their countries.

Indonesia is also on the verge of reallocating its 2600MHz spectrum through the use of its spectrum fund model.

Mr Minehane said the source of spectrum fund stems from the proceeds generated through licence auctions.

A study by Huawei said that Thailand's average mobile broadband internet speed as of February stood at 14.7 megabits per second, compared with Singapore at 45.6 Mbps, 15.2 in Vietnam and 12.1 in Malaysia.

Mr Shone said home broadband internet, especially in video and virtual reality forms, will be a killer application in the 5G era.