A chief suspect demonstrates for the media how her gang allegedly created fake degrees, university transcripts and other counterfeit papers.(Photos and video by Apichit Jinakul)

The Education Ministry and police are seeking help from the Ministry of Digital Economy and Society to track down a gang selling fake diplomas, certificates and degrees on social media, permanent secretary Chaipruek Serirak said.

A website is being developed to allow inquirers to verify a candidate's academic credentials nationwide from Mathayom 3 up to post-graduate education, he said.

"This service aims to protect employers and graduates from being deceived by [fake] degrees," he said.

"They can check the verification of the degree by attaching the required files and sending them to our officers.

"The results would be available in one or two days."

Police on Sunday announced the arrest of four people and charged them with falsifying education certificates for sale on the internet, in Surin and Ubon Ratchathani.

The MPB has been tracking the two gangs and working with the local police who arrested them.

The courts in the two provinces issued arrest warrants for them on a charge of colluding to falsify education certificates, an offence punishable by jail terms of between six months and five years, and a fine of between 1,000 to 10,000 baht.

Mr Kittiwat allegedly admitted he studied how to falsify the documents online.

He told police he used Photoshop to get the certificates stamped with a fake copy of a seal from a school or university.

He paid for the stamps to be produced by specialised shops at prices ranging from 3,500 baht to 9,800 baht apiece. 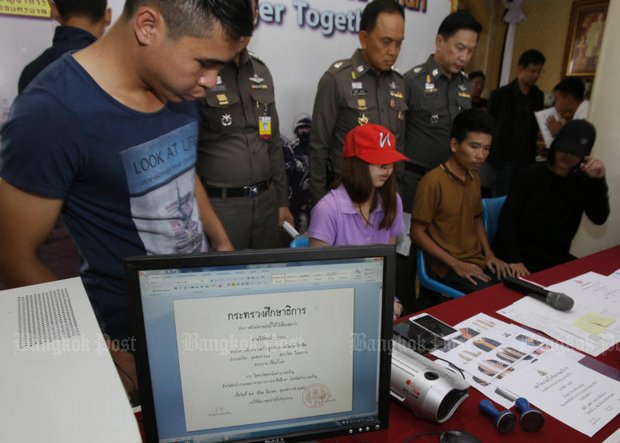 The four arrested suspects and samples of their work were taken to a press conference on Sunday by Bangkok police chief Sanit Mahathavorn, second from right.

The suspect said customers ordered mostly Mathayom 3, Mathayom 6 and the kor sor nor (Office of the Non-formal and Informal Education) certificates online.

They mostly used the certificates to apply for jobs in small and medium-sized companies which usually do not check the authenticity of the papers.

Mr Kittiwat said he received between 10-20 orders a month on average and has been selling the fake papers for two years.

The two groups of suspects had made about 1,000 fake certificates in total, according to their accounts.

Mr Chaipruek said it is hard to get rid of networks that supply fake degrees online because when their website or Facebook page is removed, the gang simply starts a new website.

He warned students and the public not to fall victim to the fraudsters.

He also cautioned that using fake diplomas or certificates as a reference to apply for jobs risks criminal litigation with penalties including jail terms ranging from six months to five years.

"In some countries, the situation has reached the point where many schools and universities are adopting bar codes and other technologies to uniquely identify their certificates," he said.

"But I cannot tell yet whether we will reach that point."

Most of them avoided applying for jobs with state agencies as these tend to do more thorough background checks, he added.

Thai universities and higher educational institutions, especially the 30 members of the Council of University Presidents of Thailand (CUPT), are now strict in verifying the certificates and educational qualifications of candidates, said Suchatvee Suwansawat, president of King Mongkut's Institute of Technology (KMITL).

KMITL has always verified the certification of lecturer applicants, said Mr Suchatvee, who also serves as chairman of the CUPT.

However, he said no applicants using fake certificates would dare claim they graduated from leading universities in Thailand when applying for a job or pursuing further study as they would lack the ability to work or study as claimed.

Meanwhile, the Coordinating Centre for the Public Higher Education Staff earlier this year asked the Department of Special Investigation to look into the issue of fake degrees online, after some university lecturers were found using fake doctoral degrees from prestigious universities abroad when applying for jobs.

For "proof" of a master's degree, the price starts from 100,000 baht, depending on the level of technical sophistication required in producing the fake papers.

Some customers needed the papers to further their studies, according to the source, adding some vendors were also falsely claiming strong connections with the universities in question.