The Royal Thai Armed Forces announced Tuesday it has drafted 20,000 vocational students and teachers to man Songkran checkpoints with soldiers and police, although the authority and duties of the untrained students are unclear. (Bangkok Post file photo)

About 20,000 vocational students and teachers are being stationed at 251 vehicle checkpoints nationwide over Songkran this week in a bid to curb traffic accidents, which spike dramatically over the festive period.

The Royal Thai Armed Forces have also set up 39 service points across the county together with police and local administrative officers for the safety and convenience of revellers, officials said.

These will operate from 8am to 12.30am, said Suthep Chittayawong, secretary-general of the Office of Vocational Education Commission (Ovec).

The campaign aims to reduce traffic injuries and fatalities while encouraging students to engage in more fieldwork. It was jointly set up by the Ovec and the Land Transport Department.

The government rolled out several new traffic laws for Songkran, including one banning passengers from the cargo beds of pickups and another ordering all passengers to wear seat belts. It later said these will not be strongly enforced until after the holiday.

Tuesday also marked the first day a new law was enforced which strictly limits the number of passenger seats in vans to to 13. But drivers who violate the law will only get a warning this week so as not to cause congestion or other problems over the holiday, said Deputy Transport Minister Pichit Akrathit. 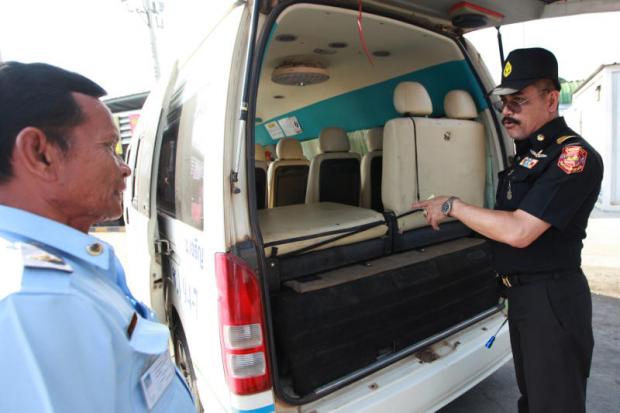 A Land Transport Department official inspects a van at a checkpoint in Bangkok's Chatuchak district after the law regulating van passenger seats came into force Tuesday. (Photo by Wichan Charoenkiatpakul)

Police and other authorities should use their discretion in dealing with traffic law offenders during the holiday, according to Gen Pisit Sitthisarn, deputy secretary-general of the National Council for Peace and Order. His comments were relayed by Royal Thai Army deputy spokeswoman Sirichan Ngathong Tuesday.

Col Sirichan asked the public to cooperate by staying vigilant and reporting any suspicious persons or activities to the authorities during Songkran.

The ministry and authorities are strictly enforcing traffic laws on private and public drivers this week to try and reduce the number of road accidents over the holiday, he said. But the government has also indicated that police may exercise some leniency over the so-called "7 Dangerous Days" on a case-by-case basis.

The ministry also launched a new road safety campaign for this year's holiday urging people to drive safely and avoid speeding or driving under the influence of alcohol.

Drivers found under the influence could face a maximum jail term of one year and/or a fine of between 5,000-20,000 baht.

According to the ministry, the number of road accidents jumps five-fold over Songkran, with 80% of the casualties involving people on motorcycles.

Some 442 people aged 25-35 were killed in traffic accidents during the festival last year with 3,656 injured, the official statistics show.

Thailand has the second-highest number of road accidents worldwide. Most are caused by drink-driving, speeding, sleeping at the wheel, cutting off other vehicles, driving without safety helmets, or running red lights.

Mr Pichit said 140,000 people were expected to be travelling across the nation by bus or train on Tuesday alone, with the same number expected Wednesday.

Some 1.4 million passengers are expected at Don Mueang airport from April 5-18. This is up 5.6% from last year, the airport said.

JAKARTA: Indonesia has reinstated a temporary luxury-tax break on sales of smaller cars as the concession helped boost demand for vehicles, the Finance Ministry said on Friday.