Passengers were stranded at Suvarnabhumi airport on Tuesday night after discovering there was no trip to Japan after all. (Photo by Patipat Janthong)

Police are gathering evidence before taking action against a travel agent that spoiled a trip to Japan by about 1,000 tourists left at Suvarnabhumi airport with no planes to go.

Samut Prakan police sent more than 50 officers to join tourist police and Suvarnabhumi airport police in receiving complaints from the holidaymakers at the airport.

The common target is WealthEver, a company that usually sells supplement vitamins, which had claimed to be arranging the Songkran trips.

The Office of the Consumer Protection Board announced that WealthEver was never registered with the Board for any service including sales of the supplements. (Facebook link in Thai)

According to the testimony of the disappointed and often angry tourists, each paid between 9,700 and 20,000 baht for a trip to Osaka by charter flights. They were told their flights would be between Tuesday night and Sunday.

When the would-be tourists arrived at Gate 1 of the departure hall at 8pm at Suvarnabhumi as directed, there was no sign of the promised WealthEver representative to guide them to check-in for their flights. The company took down its Facebook page as well.

The holidaymakers then checked all airlines and found no charter flights had been booked for their trips. 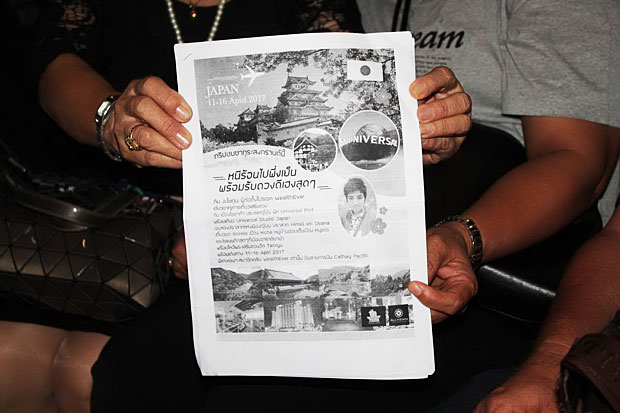 One of the would-be holidaymakers shows a brochure promoting the trip to Japan by WealthEver. (Photo by Suthiwit Chayutworakan)

Authorities believe that another large group of people will show up on Wednesday, having also fallen for the WealthEver promise of budget trips to Japan.

Samut Prakan police chief Pol Maj Gen Thammanoon Trithippayapong said that all information gathered from the travellers, along with other evidence, will be used to take action against  the firm.

Other people paying for the trip can file a complaint at police stations where they live.

All information will be handed over to the Crime Suppression Division, which will be the lead agency handling the case, he added.

Tourism and Sports Minister Kobkarn Wattanavrangkul talked with some tourists at the airport but refused to speak with the media.

Many passengers left the airport after filing a complaint and realising they were not going to Japan, while others stayed at Suvarnabhumi because they lacked transport to return home during the Songkran break.

Nirun Saentaweesuk from Ubon Ratchathani said he bought a package for 88,200 baht for himself and nine persons.

"I've decided to meet Suvarnabhumi airport police after finding out that I was conned," he said.