Death toll drops at start of Songkran but injuries rise

There have been 82 deaths -- compared with 116 over the same period last year -- and more than 1,000 injuries from road incidents since the Songkran road safety campaign began on Tuesday, authorities say.

More than 500 vehicles were impounded on Wednesday, the first day of the anti-drink-driving measures during the festivities, a National Council for Peace and Order deputy spokesman said. 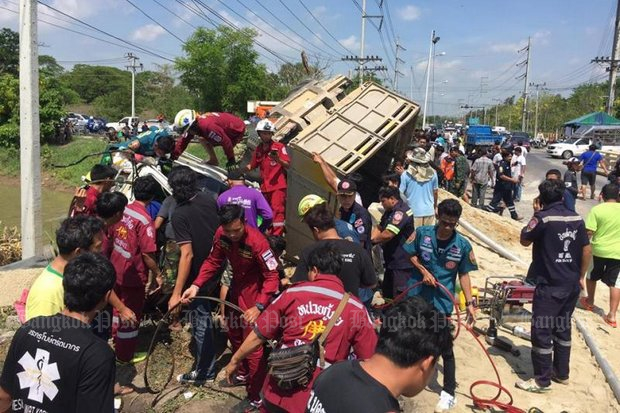 Rescue workers release trapped victims from the wreckage after a trailer truck and a car crashed head-on in Ayutthaya's Nakhon Luang district on Wednesday. Two people were killed and a third seriously injured. (Photo by Sunthorn Pongpao)

The cumulative damage during the so-called "seven dangerous days" starting Tuesday stood at 995 accidents, 82 deaths and 1,049 injuries as of Wednesday, he said.

The number of accidents and injuries was higher than last year, when 907 cases and 981 injuries were reported, respectively, but the death toll has dropped from 116 over the corresponding period in 2016, authorities said.

National Council for Peace and Order deputy spokeswoman Sirichan Ngathong said 433 motorcycles and 102 private and public vehicles had been impounded since the campaign began as the riders or drivers were found to have blood alcohol levels in excess of 0.5.

During the strict anti-drink-driving period, which runs until Tuesday, riders or drivers are being detained for riding or driving under the influence of alcohol.

Their vehicles are being impounded at a military camp for at least seven days.

On Wednesday, 32,782 motorcyclists were stopped for traffic law violations.

About 30,071 will face legal action while 433 have had their motorcycles confiscated and driving licences revoked, Col Sirichan said.

On the same day, 27,337 drivers of public and private cars violated various traffic laws, with 25,549 to face legal action.