Songkran travellers flock to the bus terminal of Nakhon Ratchasima province to buy tickets to Bangkok as the Thai New Year holidays nearly ended on Sunday. (Photo by Prasit Tangprasert)

The death toll from road accidents during the first five days of the Songkran holidays fell by 17.5% compared to the same period last year on Saturday but the numbers of accidents and injuries continued to increase.

Nearly 3,000 traffic accidents killed almost 300 people and injured more than 3,000 during the first five days of travel during the Songkran festival as vacationers were returning from the provinces to work on Sunday.

The Department of Disaster Prevention and Mitigation reported on Sunday that from April 11-15, 2,985 traffic accidents killed 283 people and injured 3,087.

Over the five days, Chiang Mai province, a popular destination for Songkran travellers, posted the highest numbers of accidents (140) and injuries (145). The highest death toll of 17 was reported in Nakhon Ratchasima province, the gateway to the Northeast.

On April 15 alone, there were 600 traffic accidents which killed 53 people and injured 634.

Drink drivers remained as the most common cause of the accidents, responsible for 45%, followed by speed limit violations (25%).

From April 12-15, the National Council for Peace and Order seized 3,969 motorcycles and 1,243 other vehicles from drink drivers in a bid to curb traffic accidents during the Songkran festival. 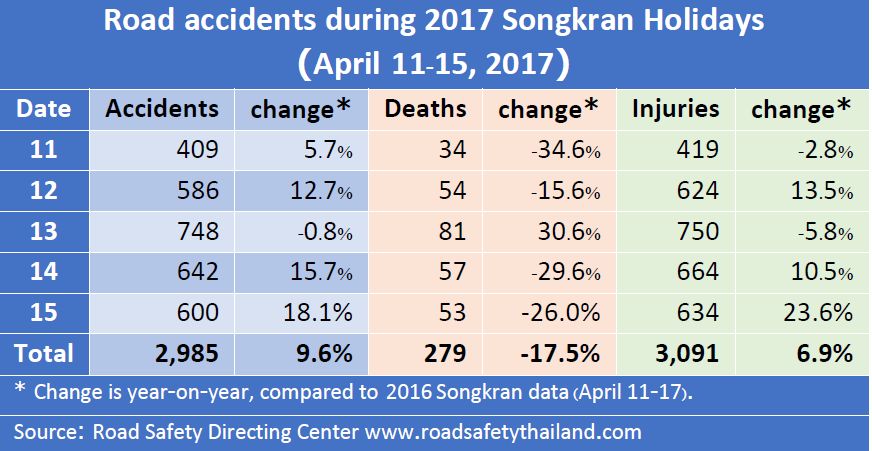