Store gutted by fire after car crashes into it
Thailand
General

Store gutted by fire after car crashes into it

The fire gutted 7-Eleven after a car crashed into it in Pathum Thani overnight. (Photo by Pongpat Wongyala)

PATHUM THANI -- A convenience store was completely destroyed after a speeding car crashed into to it and caught fire early on Tuesday. The car driver was badly hurt, police said.

The incident occurred about 12.30am on the Pathum Thani - Sena road in Sam Khok district.

Eyewitnesses told police the white Nissan Teana was travelling at high speed, heading toward Sam Khok district from Pathum Thani township, when it veered off the road and into the 7-Eleven store.

This was followed by a loud noise and the car was then engulfed in flames. The blaze gutted the store. Firefighters took about 40 minutes to put out the fire.

The driver, identified later as Thanawee Thanachotchuang, escaped from the car but suffered serious burns. He was admitted to Pathum Thani Hospital.

Prapa Modjaem, the assistant store manager, told the police he, his wife and  employee, Nanharuethai Sonsith, 18, were inside the store when the car crashed through the front wall.  They fled into the street narrowly escaping injury.

Police were investigating. The damage had yet to be assessed. 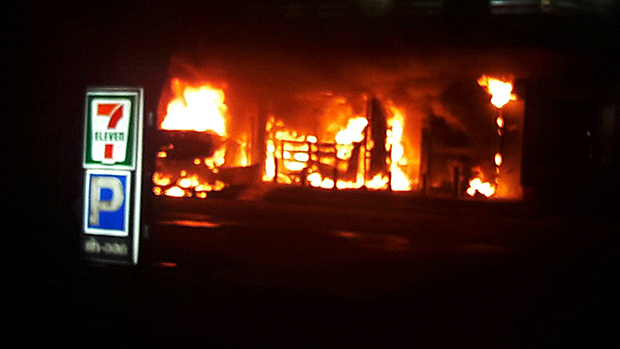 Fire destroys a 7-Eleven store in Pathum Thani after a car crashed into it overnight.(Photo by Pongpat Wongyala)