City Hall 'adviser' Vallop Suwandee says he will reprieve street food sales in some areas of Yaowarat (above) and Khao San Road areas but they have to stop 24-hour service. (Bangkok Post file photo)

Street food will be improved in regard to hygiene and safety for tourists and locals, according to City Hall, which continues its programme to close down all street food sales despite public outcry.

Vendors in Khao San Road and Yaowarat Road are able to ply their trade in their original spots but service hours need to be adjusted, he said.

Officials are working out appropriate times of the day.

Vendors will not be allowed to sell food around the clock, Mr Vallop said.

His comments follow a storm of criticism from netizens and foreign tourists over reports the BMA intends to ban street food from the capital by the end of this year. 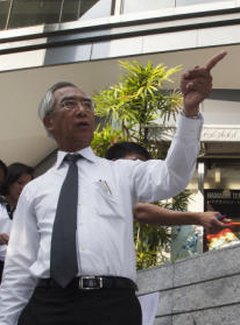 Vallop: Will train vendors on how to sell food

The BMA has issued pavement regulations in response to a large number of complaints by residents who say street vendors obstruct footpaths, forcing them to walk in the street, he said.

City officials have been instructed to work out how to tackle illegal street vending and food quality, Mr Vallop said.

Health Department officials in Samphanthawong district, which oversees Yaowarat Road; Phra Nakhon district, which is responsible for Khao San Road, and traffic police are working together to solve the problems.

Meanwhile, a team of city officials is speeding up the introduction of rules regulating the sale of street food on Khao San Road and Yaowarat Road, Mr Vallop said.

Officials are preparing a training programme for street vendors who have registered with authorities to sell food in the city, he added.

The programme involves good hygiene practices in the preparation and sale of food, waste management and dress codes concerning food vendors, he said.

All vendors are required to attend the programme, Mr Vallop noted, saying they will receive a certificate if they complete it.

Inspections will be conducted periodically to boost consumers' confidence, he added.