City Hall on back foot in clean-up drive
Thailand
General

City Hall on back foot in clean-up drive

A heavy backlash from the public and food vendors has forced City Hall to come out and explain its planned "regulation" of street food in the capital.

While the eviction of street vendors from many parts of the city has been carried out for the sake of hygiene and orderliness, according to officials, the City Hall's implementation and enforcement of the drive has sparked criticism from many quarters.

The plan sparked rumours the Bangkok Metropolitan Administration (BMA) would ban street food in Bangkok's popular tourists spots with their ubiquitous roadside local dishes, including Yaowarat and Khao San roads, despite the fact Bangkok's street food was ranked the best in the world and is one of the city's biggest attractions. 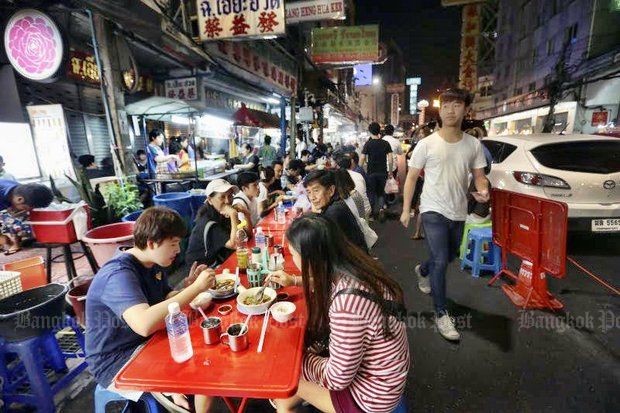 Officials dealing with the backlash including Vallop Suwandee, chairman of advisers to the Bangkok governor, denied claims they were wiping out street food from the popular tourist spots, saying the BMA only aims to enhance the hygiene and orderliness of street food on the two roads, not ban them as reported by the media. The plan involves pavement and street vending regulations, food safety measures and improving food hygiene standards.

''CNN reported Bangkok is the world's top city for street food which is available around the clock. Therefore, the prime minister wants to harness this opportunity to boost the Thai tourism industry,'' he said.

His claim was backed by government spokesman Lt Gen Sansern Kaewkammnerd, who confirmed the authorities have no intention to ban street food in tourist-heavy areas as Prime Minister Prayut Chan-o-cha described street food as unique and one of the charms of the capital.

He said the authorities' clean-up drive is to ensure order and maintain food hygiene and cleanliness.

However, critics still question whether the City Hall's move does more harm than good, and if visitors are getting a clear message about what it intended.

A famous street food blogger, Chawadee Nualkhair, wrote on her Bangkok Glutton blog: "As you may have already heard, the BMA has plans to bring 'order' and 'hygiene' to the streets by clearing away many of the vendors on the sidewalk. This is roughly analogous to telling Axl Rose that all he needs to turn back the clock is a nice black t-shirt, but that is neither here nor there.

"What really matters is how far is the extent of the planned ban? Is there a plan at all, or is it a case of a government official being quoted on something, and then after the resulting furore, everybody going 'Oh yeah, our bad, never mind?' Nothing to see here, folks. Move along."

"After widespread concerns the 'world's street food capital' would go all Ghostbusters on its own street food, the final answer so far is 'no, the places that tourists like to go to will not be affected, so you can stop writing negative stories about it now, please, thank you for your understanding'," she wrote.

Meanwhile, a 55-year-old roadside food vendor in the King Petch area, who asked to be identified only as Pa Kaew, said she understood the government wanted to provide food safety and convenience for foreigners as the tourism industry was one of the country's main sources of revenue.

However, she couldn't help doubting whether such a strict measure should be rolled out while Thailand is in an economic downturn and many people could suffer.

The government should also think about residents in Bangkok and provide them with reasonably priced food options, particularly low-income earners, she said. Street food was part of locals' way of life.

Pa Kaew said she agreed with the measures to improve food hygiene and ban vending stalls on streets as they obstructed traffic flow.

Nevertheless, it was the government's duty to provide new locations with cheap rental fees for the vendors not far from the areas they had originally set up shop. 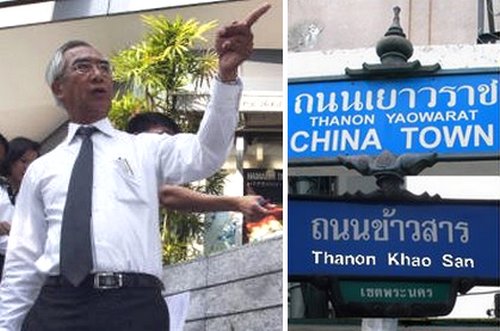 Soon, according to Mr Vallop (left), there will be just two places left to get street food - and they will be heavily regulated. (Bangkok Post, Creative Commons photos)

She also admitted it was unfair street food was allowed only on Yaowarat and Khao San roads, saying although tourists will help spur the country's revenue, food vendors in other areas needed to earn a living as well.

For the second year running, CNN in April named Bangkok the city with the best street food in the world. Countries that ranked second and third are Tokyo, Japan, and Honolulu, Hawaii.

In Bangkok, the areas renowned for a variety of local palatable dishes are Yaowarat, Khao San, Sanam Chai (Pratu Phee) and Silom roads.

Bangkok was also named the world's best city for street food according to a survey which canvassed 1.2 million tourists from 220 countries around the world, conducted by www.virtualtourist.com, a travel site.

Last week, a storm of criticism erupted from the public on the clean-up drive after some media outlets reported the BMA was preparing to purge street food from the city's two main tourist spots just as they had done in other areas. The street vendor ban is part of a clean-up campaign orchestrated by the National Council for Peace and Order.

Mr Vallop admitted he gave an interview to the media, but insisting the published information was not true as it is impossible to ban all food vending stalls from pavements in the city as they were part of residents' way of life.

He said the regulation of street food would be conducted only in the inner areas of the city that are crowded with people.

Despite the international praise for Thai street food, Mr Vallop said hygiene and food safety have not been counted in the ranking system. Thus, stricter rules to regulate street food on both roads will be implemented with regard to hygiene and safety for both tourists and locals.

The BMA also holds a list of all food vendors in both places. They need to pass hygiene training before being allowed to operating their businesses.

During the training, vendors will be supervised on several regulations including cooking food only in dry areas and at least 60 centimetres above the ground.

Cooks must wear outfits in accordance with the BMA's rules and cutlery and other utensils must be cleaned properly. While vendors in Khao San Road and Yaowarat Road would be able to continue their businesses in their original spots, the service hours needed to be adjusted, he said.

Mr Vallop said a panel, comprising several agencies including police, was also established to supervise the management of street food in both areas.

Besides ensuring food hygiene, the drive seeks to prohibit migrants from selling food as the BMA's survey found illegal migrants operated food stalls in the two tourist spots in violation of the law.

"By the end of this year, Bangkok residents will experience a new look of street food on Yaowarat and Khao San roads," he said.