PHUKET - A young man reportedly hanged his 11-month-old daughter live on Facebook and then hanged himself at an abandoned hotel in Thalang district on Monday night.

The two bodies were found inside what was once The Peninsula hotel, at Moo 3 in tambon Sakhu, after police had searched several other deserted hotels.

The hotel is promoted on some tourist websites as a haunted building. 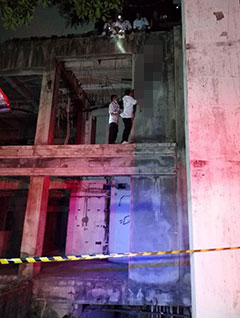 The search was launched after a woman, Jiranuch (surname withheld), 21, asked police to find her husband, Wuthisan, 21, who had left with their 11-month-old daughter after a quarrel earlier on Monday.

Ms Jiranuch called police after learning that Wuthisan had posted on a Facebook page a video clip of him hanging their daughter with a rope from the ceiling of an abandoned hotel.

After examining the video, police searched several abandoned buildings before ending up at the Peninsula, where Wuthisan and the girl were found hanged from the ceiling of a room on the third floor.

An elder brother of Ms Jiranuch, who identified himself only as Suksan, told the police Wuthisan had worked for a firm in Thalang district. Wuthisan and Ms Jiranuch had a quarrelled and she had left the house.

On Monday he and Ms Jiranuch went to the house together because his sister planned to tell Wuthisan she wanted them to separate for a while. While at the house, Wuthisan came out with his daughter and told them he was going to work. Wuthisan later phoned and said he would be back home with the girl by 7pm.

Mr Suksan said that while waiting he saw on Facebook the video clip of Wuthisan hanging his daughter.  He told his sister, who immediately informed the police and asked them for help.

Police were investigating. It was initially believed Wuthisan hanged his daughter, and then himself.