Around 200 people have petitioned the Department of Special Investigation (DSI) to accept a case in which they were allegedly swindled out of around 2 billion baht in a foreign stock trading scam.

Noraset Mareelaksanapon, a 45-year-old businessman, who led the group, claimed yesterday he was invited by relatives to invest in stock trading with Eagle Gates Group, which was planning to set up a branch in Thailand last May.

He said he was asked to transfer money to the company's broker who would trade on his behalf. Persuaded this could return a handsome profit, he and his relatives used their savings to invest in it, he added.

The trader allegedly told him that, despite the risk, the returns would be worthwhile as the firm would profit from trading in stocks worldwide, including Japan's Nikkei and the Dow Jones and S&P 500 in the United States.

The trader also claimed the Florida-based company has offices around the world, including in China, Japan, Germany and the United Kingdom, Mr Noraset said, adding that this influenced his decision to invest.

He traded 500,000 baht and was about to invest another 4 million baht but has been unable to reach the broker since November, he said. 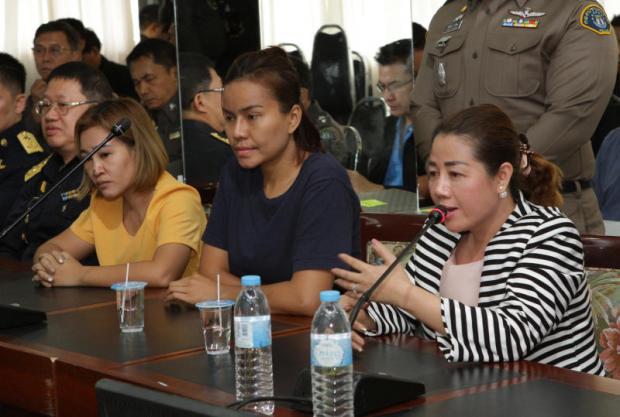 Another alleged victim, 65-year-old real estate developer Muthita Thiplapon, said she learned about the investment opportunity from a representative of the company. They made contact when the representative expressed interest in purchasing two houses from one of her projects early last year, she said. The person started investing in October, she added.

Ms Muthita said she was finally convinced to invest 8 million baht in the scheme by a group of people, including Thais and foreigners. One of them claimed to be the CEO of the firm, she said. So far, she has seen a return on her investment of just 680,000 baht, she added.

"In November, I was unable to check my stock portfolio, but the company's broker said it was because of a glitch in the system and that it was being fixed," Ms Muthita said.

"But when I talked to other investors it became clear that we may have been duped."

Most of the victims are well-educated, she said, adding that one doctor invested over 20 million baht.

Prachin Buri resident Apichart Hansasathit said he handed over 700,000 baht to the broker as part of a larger group in the province whose investments totalled 20 million baht.

He was poised to invest a further 1.8 million baht but found the office had apparently closed down in November.

The company organised a lavish business launch at a hotel where investors were invited to stay for three days at no charge, Mr Apichart said. Throughout the event, a Mercedes-Benz, gold necklaces and other expensive electronic devices were distributed to attendees, he said. People who claimed to be Florida-based executives from the firm were also present, he added.

Meanwhile, the Crime Suppression Division (CSD) has arrested four people for allegedly swindling 14 people out of more than 82 million baht by persuading them to invest in Palitta Pure Intercosmetic, a cosmetics firm.

The victims were promised a 10% monthly return but claim to have received nothing, CSD chief Suthin Sappuang said yesterday. Another suspect is still at large.

In other news, a prime suspect in the bogus lottery scheme is still believed to be hiding in Thailand.