MAHA SARAKHAM - Three young sisters drowned in a lotus swamp while their mother was collecting the flowers for sale on Wednesday in Kosum Phisai district.

The tearful mother, Bu-nga Ardee, 34, told police the three girls were aged 9, 7 and 2 years. She had two other children. Her three daughters and a nephew accompanied her to the swamp on Wednesday morning to collect lotus flowers for sale in the market.

The children were left playing on dry ground beside the swamp while she went down into the water alone to collect flowers. She heard her nephew shouting merrily that he had caught a pla chon, snakehead fish. She told him to put it in a fertiliser bag she had brought with her.

When she returned to shore later she could not see her daughters anywhere. She became worried and frantically began looking for them, but to no success.

Rescue workers were called in to help search for the missing girl. She was later found drowned 3 metres away from the shore. 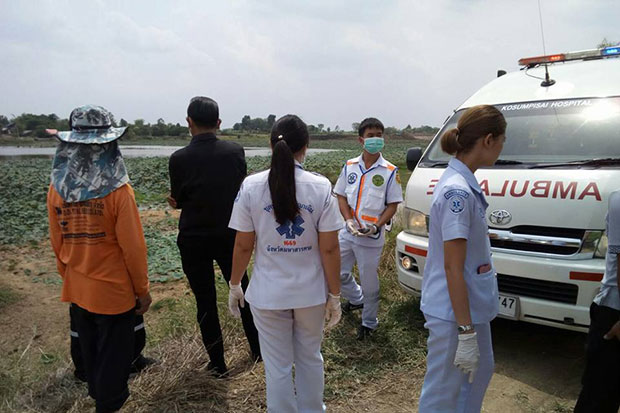 An ambulance crew prepares to take away the bodies of the three sisters who drowned in a lotus swamp in Kosum Phisai district, Maha Sarakham on Wednesday. (Photo taken from Taweewut Seedawat Facebook page)

Talks on reviving the Iran nuclear deal, which have been stalled for three months, will resume within days, the European Union's foreign policy chief Josep Borrell said Saturday during a surprise visit to Tehran.