The shriek of a jumbo airliner taking off isn't allowed to interfere with the game at the unique Don Mueang airport golf course. (File photos, Creative Commons)

The air force has been asked to boost security at its golf course next to Don Mueang airport's runway ahead of an inspection by the International Civil Aviation Organisation (ICAO), according to the Civil Aviation Authority of Thailand (CAAT).

The UN-based agency is due to audit the safety standards at Thai airports as part of its Universal Security Audit Programme (USAP) in July this year.

The air force was asked to tighten security at the entry and exit to the golf course with explosive detectors deployed there as well as at its club house, he said.

"We must close off risk spots around the golf course," Mr Chula said.

He said the CAAT had asked the ICAO office in Thailand whether security issues at the golf course could have implications for the audit results. The organisation replied it is unlikely, but stressed it could not say anything on behalf of the ICAO's officials who will conduct the audit.

According to Mr Chula, the CAAT will answer 50 questions raised by the ICAO and send answers back to the agency early next week. Most of the questions concern the rules, regulations, systems and security measures of Thai aviation, he said.

The ICAO will analyse the answers and use them as information when it comes to carrying out the audit in July, he noted.

He said aviation safety agencies from the United States and Australia have been invited to carry out the inspection and they expressed no concerns about it.

In June 2015, the ICAO issued a "red flag" which it said indicated significant safety concerns. That resulted in Thai-registered airlines being required to go through a re-inspection of their Air Operator Certificates (AOCs).

Speaking after a meeting of the committee tackling the aviation safety concerns raised by the ICAO Thursday, Transport Minister Arkhom Termpittayapaisith said the CAAT has re-issued AOCs to two airlines -- Bangkok Airways and Thai AirAsia. Around 10 carriers could have AOCs re-issued by June, he noted.

Out of 33 safety concern issues raised by the ICAO, more than 80% of them have been addressed, Mr Arkhom said, insisting all would be resolved by the end of June.

Below is the view from the cockpit of the twin runways and golf course when landing at Don Mueang. 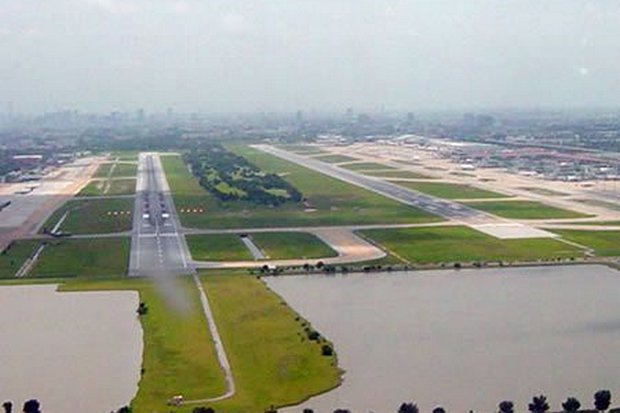