Navy chief-of-staff Luechai Ruddit signed the contract for the purchase of the first of three submarines from China in Beijing on Friday.

Both sides examined the documents. China made no changes to the version scrutinised by the Thai attorney-general. The Office of the Auditor-General also gave a green light for the signing, so it went ahead, Adm Luechai said in Beijing.

Earlier the navy chief-of-staff's visit to Beijing was set from May 4 to 7. He signed the contract on behalf of navy commander-in-chief Adm Na Areenich.

The navy has plans to buy three of the Yuan Class S26T submarines eventually from China at a total cost of 36 billion baht spread over 11 years. The "T" designates the version being sold exclusively to Thailand.

Under the contract, the 700-million-baht down payment on the submarine, to be delivered in six years, must be paid within 45 days.

Opponents of the procurement earlier criticised the cabinet's quiet approval of the deal on April 18. They also doubt whether the navy really needs a submarine, citing the shallowness of the Gulf of Thailand.

However, defence authorities insist submarines are necessary because neighbouring countries already have them. They also argue that the medium-sized submarine will be able to navigate through the Gulf.

The contract was signed before the Office of the Auditor-General has completed its scrutiny of classified navy documents concerning the deal. Auditor-general Pisit Leelavachiropas said on Thursday the check would take about a week.

Under the contract, China will also provide free CM-708 missiles which can be fired from the submarine at targets on the water's surface or on land over a range of 290 kilometres. The sub also comes with other weapons including torpedoes and a two-year warranty.

The navy has announced plans to build docking facilities for submarines both in the Gulf of Thailand and the Andaman Sea. 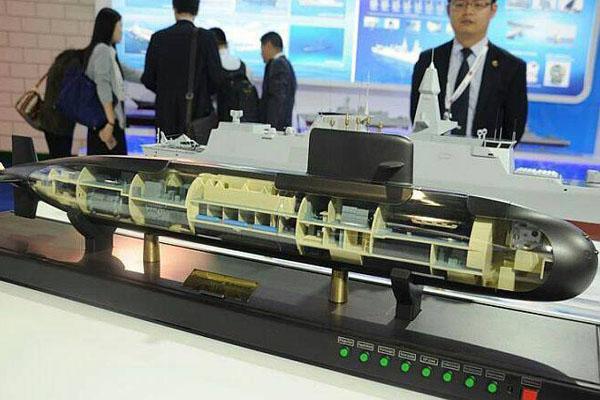