A man points to a bees' nest at Nong Bua School in Nakhon Sawan province after the attack on Sunday. (Photo by Chalit Pumruang)

NAKHON SAWAN - Swarms of bees from huge nests attacked pupils and parents who were gathering for a meeting at Nong Bua School in Nong Bua district on Sunday. About 20 children were injured.

The incident happened in the morning while parents and pupils attended a meeting for the 2017 school year in the auditorium. Witnesses said gusty winds hit two bees' nests about one metre long on a big tree just opposite the auditorium.

Hundreds of bees then attacked the meeting participants including teachers as well as outdoor vendors. About 20 pupils were injured. Their parents rushed them to a local hospital.

Beverage vendor Pongnapa Nakarat said about 20 bees stung her both inside and outside her clothing. She had to keep running away and take off her shirt.

She said that fortunately she was not allergic to bee stings but some pupils were and needed an injection.

Local teachers said everyone was safe but they would ask municipal officials to get rid of the bees' nests. 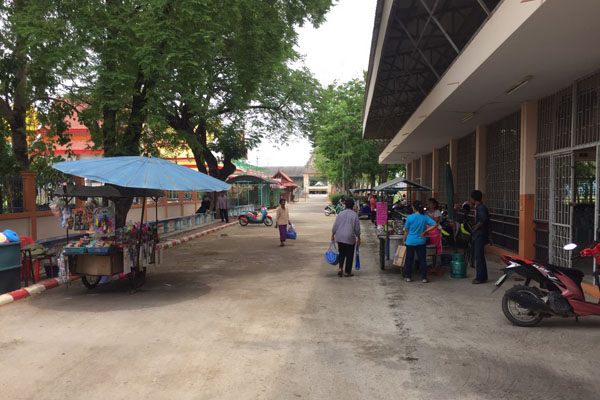 The auditorium is close to big trees where bees live. (Photo by Chalit Pumruang)