SURAT THANI - A Spanish man caught in a video clip having sex with a foreign woman on Koh Samui in broad daylight was charged and fined 1,000 baht.

The 28-year-old foreigner (name withheld) admitted he was the man in the clip when police tracked him down to a hotel room on Hat Ban Nathon beach in tambon Ang Thong on Tuesday, said Pol Col Paithoon Krajajang, chief of Koh Samui police.

He stayed in the hotel about 50 metres away from the area, where the clip was taken.

The clip and photos of two foreigners in an act that resembles having sex on the beach on Chonwithi Road drew criticism from online users after it went viral online. The beach is a popular sunset viewpoint of the tourist island. 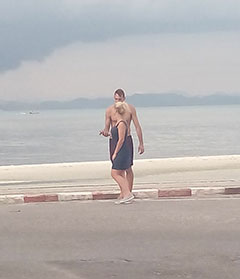 A Spanish man, 28, is charged and fined 1,000 baht for having sex with a woman in public. (Photo via Ruam Phol Khon Samui Facebook page)

After watching the video, the Spaniard admitted to having sex with the woman on the beach.

He told police that before the incident, he went to a nightspot on Chaweng beach on Koh Samui and found a Russian, who was the woman in the clip. They got drunk and he later invited her to his hotel room. When arriving at the room, he found his friends were sleeping there. So, he took her for a walk along the beach and they ended up having sex there.

The 28-year-old tourist apologised to Thai people for his action.

He said he had entered Thailand on May 4 and arrived at Koh Samui on May 7. He planned to visit the popular Full Moon party on Koh Phangan on May 10 before going to Phuket. He was scheduled to return to Spain on May 18.

Police charged him with lewd behaviour. The offence carried a fine of up to 5,000 baht but the investigators fined him 1,000 baht.

Pol Col Paithoon said police would look for the Russian woman. They received information that the woman had checked out from a hotel on Chaweng beach at 11am on Tuesday. She reportedly checked in at a hotel on a nearby beach.