City Hall's newest plan calls for the end of almost all street food in Bangkok, with a new 'Street Food Mecca' 25 kilometres away by the sea. (Bangkok Post file photo)

Bang Khunthian Chai Thalay is set to be a new street food mecca in the capital, with a seafood concept, to boost tourism and the economy, according to the Bangkok Metropolitan Administration (BMA).

Deputy Bangkok governor Amnoy Nimmano yesterday said the BMA is working with the Ministry of Tourism and Sports to develop a new tourist attraction along Bang Khunthian Chai Thalay Road in Bang Khunthian district where seafood dishes will be offered.

The plan is intended to boost tourism and economy, he said, speaking after a meeting chaired by Tourism and Sports Minister Kobkarn Wattanavrangkul, at the ministry.

The session was also attended by Vallop Suwandee, chairman of advisers to the Bangkok governor; Wanttanee Wattana, deputy city clerks; and Pranee Sattayaprakob, a city official.

The BMA announced the move after it earlier decided to regulate two city street food spots, Yaowarat and Khao San roads. Under its plan, food safety measures and hygiene will be improved, proper cleaning areas will be provided, and wet waste dumping will be prohibited. 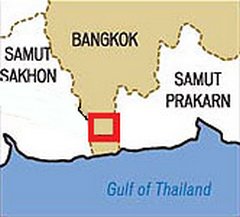 He cited Wat Trai Mit Witthayaram and other Chinese shrines in Chinatown as tourist attractions on Yaowarat Road.

To lure tourists, Ms Kobkarn urged the BMA to revamp a design plan for vendor stalls on the two popular roads which were originally thought up by district offices.

Each tourist spot should have its own character so it should have different designs according to the area, suggested Ms Kobkarn. The proposed design based on Chinese architecture for booths at Yaowarat Road should be adjusted to suit the character of the area, she added.

She also proposed the idea of expanding the street food zone to cover areas nearby.

The minister also called on the BMA to crack down on migrants working illegally on the food street.

Pol Lt Gen Amnoy said the Health Department will hold training programmes on hygiene and safety for vendors who ply their trade in the area. Vendors are required to install an effluent pipe in their stalls, ensuring they can manage waste they produce, he added.

Three Thais aboard the virus-hit cruise ship Diamond Princess confirmed infected with Covid-19 disease, as passengers continue to disembark after the quarantine ends.