Rainwater swells on the front lawn of Government House Wednesday, and more is forecast for Thursday. Three days of rain have caused traffic gridlock in many areas of Bangkok. (Photo by Thanarak Khunton)

Several northern provinces have been hit by flash floods following persistent heavy rain with the Meteorological Department warning that downpours will continue until today.

Pisit Wongthong, deputy chairman of the Nam Phi tambon administration organisation, said the flooding continued to move to low-lying areas and he had asked kamnan and village headmen in those locations to urge more than 2,000 households to move their belongings to higher ground and evacuate the elderly, children and pets from the areas.

The 35th Military Circle in the province has been asked to send soldiers to help locals evacuate, he said.

Flash floods made around 400 metres of the Phran Kratai-Kamphaeng Phet Road impassible, and traffic police told motorists to use other roads instead.

In Sukhothai province, overnight rain caused floods of up to 30cm on several roads in Muang municipality, while Ajamanas market in the area was also inundated with up to 40cm of floodwater.

In Chiang Mai, heavy rain in Doi Saket district caused the Mae Kuang waterway to burst its banks on Tuesday but the flooding receded yesterday.

No farming areas were affected by the deluge, said Wichit Langsan, the district chief, citing a preliminary survey.

Mr Wichit said officials are keeping a close eye on tambon Pa Miang in Doi Saket district, which was hit by a flash flood on Tuesday, as well as tambons Thep Sadej, Cheng Doi and Luang Nua, for signs of flooding.

In Phayao, persistent heavy rain caused a huge volume of water to flow into Phayao Lake. 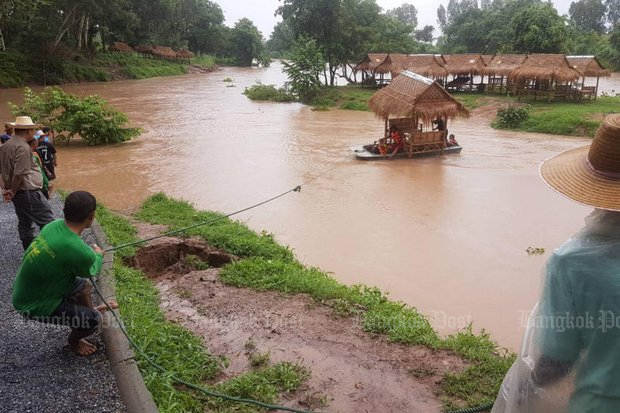 Residents try to stop a restaurant's straw huts from floating away in the swollen Kwai Noi River in Wat Bot district of Phitsanulok on Wednesday. (Photo by Chinnawat Singha)

Ubolwan Kemphet, mayor of tambon Wiang Lo municipality in Chun district, said officials and villagers were working together to make sand bags for the banks of the Chun waterway to prevent possible flooding following heavy rain.

In Phitsanulok, heavy rain from Tuesday caused flash floods in six tambons of Wat Bot district. Suwit Suriyawong, the district chief, went to the area to survey the damage.

Meanwhile, the Meteorological Department on Wednesday warned the upper part of Thailand would face heavy downpours until today. The heavy rains are caused by a low-pressure area passing from Myanmar to the North and the Central Plains, it says.

The Department of Highways (DoH), meanwhile, is preparing to help motorists who could be hindered by heavy rain during the monsoon season. DoH director-general Thanin Somboon has ordered regional highway offices, district units and local stations to be prepared to ensure safety and convenience for motorists during the rainy season.

People who need help on highways can call the DoH's hotline number 1586 around the clock, he said.