A huge electrical storm and heavy rain pounded Bangkok late Wednesday and early Thursday, flooding most roads in the city and heralding problems for the Thursday morning commute.

The storm hit the capital before midnight and continued into early Thursday. It moved off from eastern Bangkok about 1.30am but drizzles continued in much of the city until after dawn with occasional downpours. Volunteers help out a stranded motorist who got into deep water in Bangkok's Ngam Wong Wan area early Thursday. (Photo by Pattarapong Chatpattarasill)

Motorists reported traffic jams on elevated highways, while many city streets were impassable because of the floods.

Several schools announced they would not attempt to open on Thursday - among them Ratwinit Banglaew in the Si Nakarin area, Bodindecha in Lat Phrao and Amatayakul School.

The flooding was draining early Thursday, but there will be inevitable traffic jams during the Thursday morning commute after dawn. 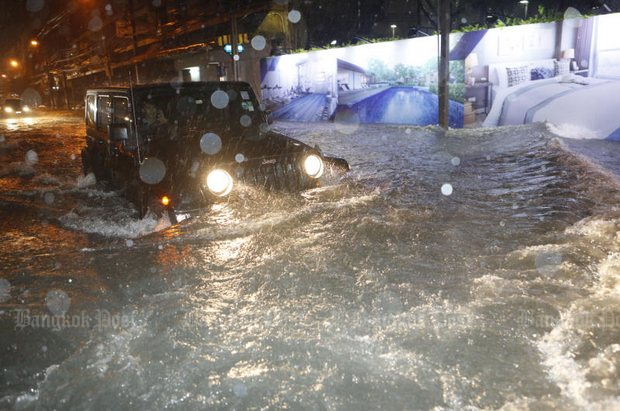 Motorists took their chances in the waist high waters in and around Bangkok's Ngam Wong Wan, where some had good luck and others stalled in the floodwater. (Photo by Pattarapong Chatpattarasill) 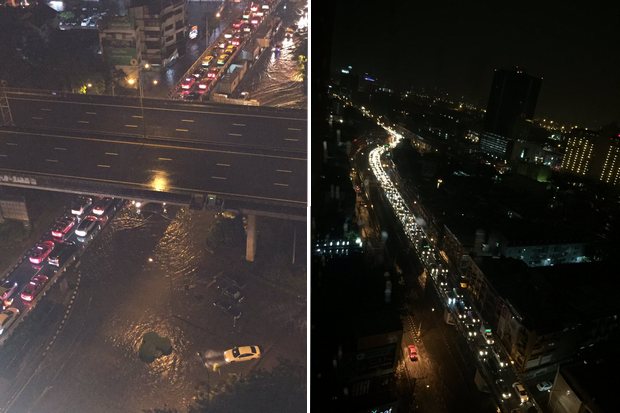 Streets below are flooded while expressway entrances are jammed in these photos taken after a downpour on Bangkok early Thursday. Below: A taxi ventured into uncharted waters left by the Wednesday night storm. (Photos via @js100radio) 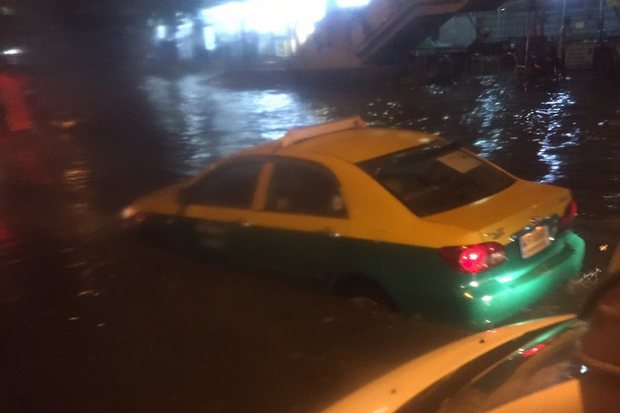 A taxi ventured into uncharted waters left by the Wednesday night storm. (Photo via @js100radio)

The Bangkok storm is part of a massive weather system stretching from the far North of Thailand into the Northeast, Central and East.

Heavy rain is forecast for most provinces in the northern and northeastern regions over the next few days.

The downpour will hit Bangkok again on Thursday and Friday, the Meteorological Department said on Wednesday.

A low pressure area over Vietnam and strong winds in the Andaman Sea are gathering pace and will bring rainfall to Thailand until Sunday.

Other parts of the country, including Bangkok, are likely to be on the reciving end from Friday. Flash floods are possible in areas near mountains.

Many parts of the country have been getting rain since last week. Eight districts of Sukhothai and three districts of Phichit are still damaged by flooding, the Disaster Prevention and Mitigation Department said. 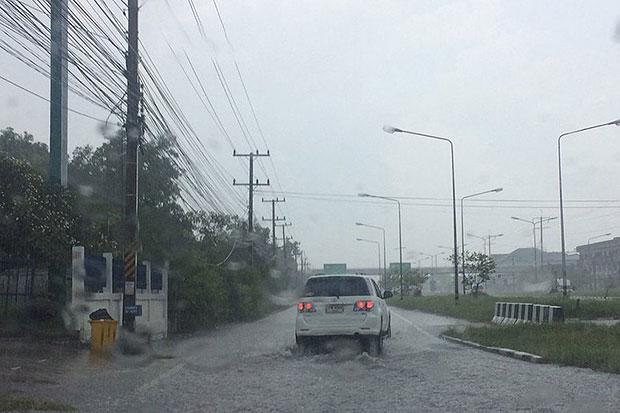 A road in Kumphawapi district, Udon Thani, is flooded on Wednesday. Heavy rain continues in most parts of the northern and northeastern regions, and is moving towards central areas, including Bangkok. (Photo from @K5_Rescue Twitter account)

Pumps were installed to drain water from farmland in the two provinces and save rice crops.

"Farmers prepare for rain every year, but it has come very early this year," Somchai Thawornkul, a farmer in Sam Ngam district in Phichit said.