Thai Airways International's refusal to subscribe to new shares of Nok Air could jeopardise THAI's fight for control over the loss-ridden budget carrier.

That would be good news for Nok Air, which has been less than keen to join the flag carrier's new consolidation plan under the THAI Group concept.

This implication emerged after confirmation that THAI had overturned its earlier decision to take up the share subscription offering at the 11th hour, just ahead of a Monday deadline.

Transport Minister Arkhom Termpittayapaisith said that he was informed by THAI executives that the flag carrier would not subscribe to the rights offering.

He said THAI remains the biggest shareholder in Nok Air, retains administrative power at the budget airline and could possibly consider buying more shares from Nok Air in the future.

SET-listed Nok Air announced that it had no problem with THAI's decision to sit out the rights offering.

Chief financial officer Brian Jeffery said Nok Air "has received a very good response from other shareholders who not only subscribed by rights, but also oversubscribed substantially".

Nok Air has received most of the rights offering share subscription, providing funds sufficient to cope with financial needs and assuring that the company will have no liquidity problems despite reports in certain media, Mr Jeffery said.

Nok Air wants to issue 781.25 million new ordinary shares, with 625 million being allocated to existing shareholders, at 2.40 baht each, with a ratio of one new issue per one existing share held.

From the exercise, the budget carrier hopes to raise about 1.5 billion baht in new funds for use in its business turnaround programme.

Nok Air's registered capital, as a consequence, will rise to 1.4 billion baht from 625 million baht now.

The identity of subscribers for the new shares was not disclosed Wednesday, and none of the existing shareholders, including businessman Nuttapol Jurangkool, the second-largest shareholder at 12.1%, had come out to refuse the offering. 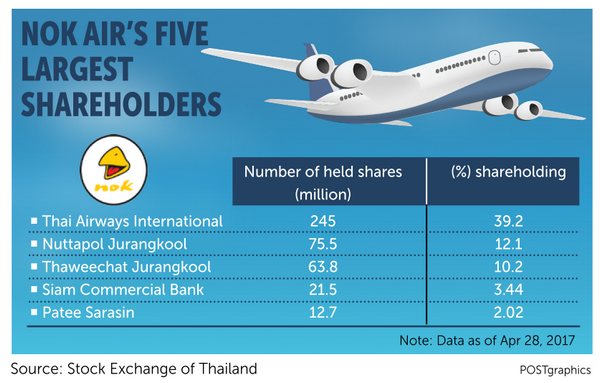 There was speculation, reportedly spread by a senior THAI executive, that Singaporean and Chinese entities had resolved to fill the gap left by THAI as newcomer shareholders. That information could not be confirmed, but a source at Nok Air said new partners have been found to buy the newly issued shares that were earlier to be sold to THAI.

According to the source, Nok Air is in talks with two foreign partners. The first is a Chinese investment group involved in tourism business. The second is Scoot, the Singaporean low-cost airline with which Nok Air has an existing partnership.

The source said the Nok Air board agreed that the management role of Patee Sarasin, the company's chief executive, should be toned down.

"They think that a professional manager who understands the aviation industry should be sought to ensure that Nok Air would be competitive in the current circumstances," the source said.

Mr Jeffery made clear that Nok Air is in the process of compiling the rights offering subscription results for reporting to the Stock Exchange of Thailand and the Securities and Exchange Commission soon.

THAI's refusal to come on board with the share subscription could foil THAI's attempt to remove Mr Patee as chief executive of Nok Air, a requisite if THAI were to acquire new shares.

These executives even suggested that Mr Patee was a major hurdle to reviving Nok Air's operations.

Mr Patee told the Bangkok Post that he is "still around" in the position he has held since the airline's founding 13 years ago and is busy working on various pending issues.