Parichat "Pang" Chatsri, the 26-year-old nurse whose photo of her at work wearing a short skirt got pulses racing after it circulated online, is taking a break from nursing, with a career in modelling potentially on the cards. 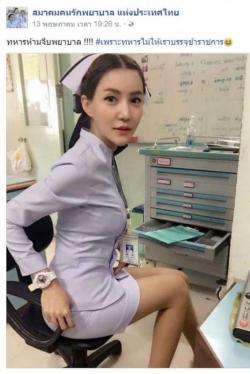 Eight days after a picture of her in hospital attire was widely shared on Facebook, she was contacted by two modelling agencies for castings.

Ms Parichat was heavily criticised online for wearing a tight uniform that revealed her shape at work. After hospital executives summoned her for a warning, she agreed to loosen her uniform within a week.

However, before the deadline, pressure on social media began to escalate, as did pressure from the hospital on her to take down the photos, fearing the images would tarnish the hospital's reputation.

The talk with some of executives, however, resulted in her decision to resign on May 21.

"This is my style. I have dressed like this all the time. I also posted photos on Facebook and it has never been a problem," she said, adding that she had worked at the hospital for almost a year.

She said many young nurses also wear their uniform in the same manner as her, adding that government hospitals are stricter.

She regularly posts photos of her in normal clothes and work dress on her Facebook page, Pang C-Yanin. It has attracted more than 56,000 followers.

On May 13, one of her pictures was reposted by the Club of Nurse Lovers Facebook page with a new caption that read "Soldiers are not allowed to woo nurses as soldiers do not let us be government officials."

At first, social media users shared the post as a gag, using an attractive nurse to raise awareness of the nurses' call for the government to give them civil servant positions instead of temporary contracts.

The pictures were followed by comments directed at Ms Parichat's tight uniform.

However, a lecturer of a state nursing science institution, who talked to the Bangkok Post but asked not to be named, said nurses' uniforms come in many styles and sometimes look modern. Professionalism and suitability for work are the key.

She said Ms Parichat's uniform and her make-up were acceptable. However, it could be her posture in the photo that made the skirt appear shorter.

The Club of Nurse Lovers Facebook page later apologised for the photo and is now closed.

Ms Parichat, meanwhile, said she wants to take a break from nursing.

"I want the issue to cool down before coming back. In the meantime, I want to try something else and see if it suits me," she said.

"I studied nursing science following my parents' wishes. They said this profession is stable," Ms Parichat said, adding that she has been a full-time nurse since graduating almost four years ago working 16 hours -- two shifts of eight hours a day, six days a week.