A wild elephant eats from a pickup truck on a rural road in Hua Hin district, Prachuap Khiri Khan, on Monday. (Photos by Sornkhwan Uthaitham)

PRACHUAP KHIRI KHAN - Wild elephants repeatedly blocked fruit-carrying trucks on a rural road in Hua Hin district so they could eat the pineapples they were carrying.

Sornkhwan Uthaitham, the resident who took the pictures, said she saw a big wild elephant using its front leg to stop a truck and reaching for food in the truck's bed with its trunk.

Mr Suwan said the latest incident happened on Monday when an elephant emerged from the roadside and leant on the truck right beside his driver's seat. Its weight dented his truck and caused a side mirror to fall while it was eating pineapples in the bay.

Mrs Suthida said the previous incident happened two nights earlier as she and her three-year-old son were accompanying her husband to deliver about nine tonnes of pineapples.

While the heavy truck slowed down on an uphill section of the same road, a big wild elephant with one tusk emerged in the middle of the road and blocked their vehicle.

It then, using its trunk, ate about 100kg of the pineapples. The truck was blocked for about 45 minutes while her husband had to keep the engine running and occasionally revved up the engine to keep its air brake system functioning or their truck would slide downward.

The sound of the accelerated truck engine irritated the elephant which reacted by roaring, frightening the whole family.

Mrs Suthida said there was not a phone signal in the area and all she could do was praying. Finally, police were passing by on a vehicle and then managed to call park rangers to chase the animal.

Local wild elephants had never behaved that way until recently. They seem to be targeting only heavy vehicles with steel cages holding fruits and would not block other kinds of vehicles, said Mrs Suthida who had lived there since childhood. 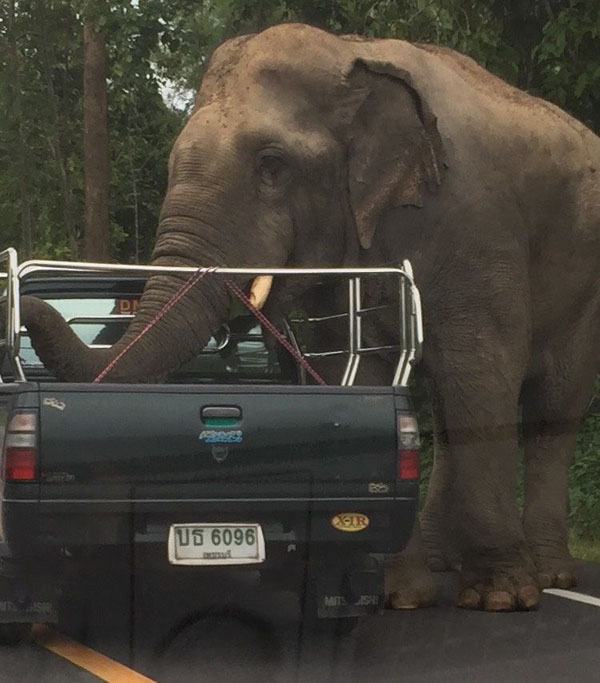