A new bus shuttle service from Suvarnabhumi airport to the city will be launched Thursday, deputy permanent secretary for transport Somsak Hommuang says.

Mr Somsak, who is also acting director of the Bangkok Mass Transit Authority (BMTA), which will operate the new bus service said the S1 route will run from 6am to 8pm.

It will run from Suvarnabhumi airport to Sanam Luang via Yommarat and Khao San Road, he added.

At the initial stage, services each way will be every half hour.

Mr Somsak said passengers wanting to use the service should wait for the bus on the 1st floor of the passenger terminal at Gate 7. 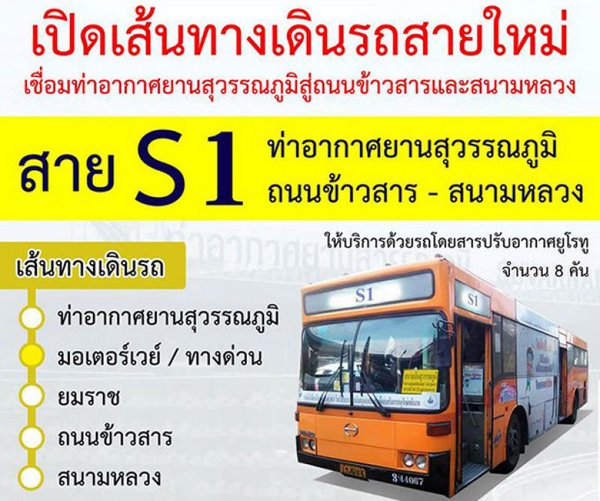 A new bus service will begin on Thursday from Suvarnabhumi airport to Khao San Road and Sanam Luang.

There is a growing number of local and foreign tourists using Suvarnabhumi airport, he said.

In response to this, the BMTA decided to operate a new bus service to link Suvarnabhumi airport to the city centre for the sake of passenger convenience.

"The service will be an alternative way of travelling from the airport to the heart of the city," Mr Somsak said on Tuesday.

The bus will proceed along the Bangkok-Chon Buri New Line motorway onto Sirat Expressway and then onto Lan Luang Road, before turning into Ratchadamnoen Klang Avenue at Phan Fa Lilat intersection.

The bus will then turn into Tanao Road at Kok Wua intersection, then pass along Sip Sam Hang Road and Phra Sumen Road before turning onto Chakkrabongse Road at Bang Lamphu intersection and head to Khao San and Chao Fa roads.

The bus will later pass underneath Somdet Phra Pinklao Bridge and then onto Rachini Road, passing Sanam Luang before terminating near the Veteran Monument in Phra Nakhon district.

Don Mueang airport is dedicated mostly to low-cost airlines and charter flights but is popular with passengers.

The services have received a positive response from passengers and generated around 225,000 baht during their first five days of operating.

Both routes have served a total of 4,506 passengers during the five days, according to the BMTA.