Two foreign men are captured by a security camera stealing a carved wooden elephant from an outside a restaurant on Koh Samui in Surat Thani in the early hours of Monday. (Photo taken from restaurant owner Sasothon Somvung's Facebook account)

SURAT THANI - Two foreign men caught on camera stealing a large carved wooden elephant from outside a restaurant on Koh Samui in the early hours of Monday were reportedly arrested on nearby Koh Phangan on Tuesday.

A video and stills from a security camera showing two men walking off with one of two carved elephants outside the Happy Chang Noi Restaurant on Koh Samui were posted the Facebook account of  Sasothon Somvung, the restaurant's owner, on Monday and Tuesday.

The theft occurred in the early hours of Monday, after the restaurant had closed. When staff arrived for work, they discovered one of the wooden elephant was missing. A check of the footage from a security camera outside the premises showed what happened.

Two foreign men were seen arriving in front of the restaurant around 2 am. They tried to lift both the elephants.  One is heavier than the other. The  duo took the smaller one, the restaurant owner posted on his Facebook.

He said his staff had filed a complaint with Bo Phud police on Koh Samui and he asked Facebook friends to help share the images.

On Tuesday afternoon he posted again, saying  the two men had been apprehended on on nearby Koh Phangnan - with the stolen elephant. 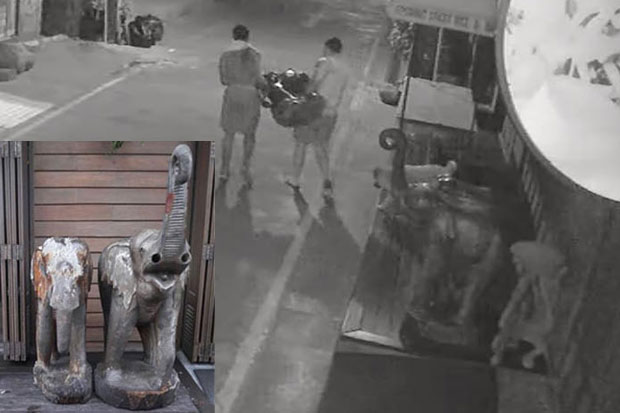 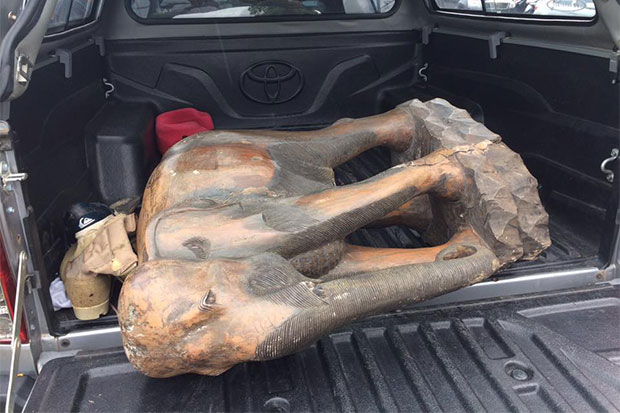 The stolen carved wooden elephant is retrieved from the two foreign thieves who were caught on Koh Phangan on Tuesday. (Photo taken from Sasothon Somvung's Facebook account.)