The three Chinese men (from third from the left) have been arrested. (Photo by Sawat Katengam)

There were hundreds of smartphones racked on metal frames and connected to computers. A search found almost 350,000 unused SIM cards.

Wang Dong, 33, and Niu Bang, 25, were detained when immigration police searched their house in tambon Ban Mai Nong Sai following a tip-off that illegal migrants were living there.

During the raid, another Chinese man, Ni Wenjin, 32, walked in. He lived next door. A subsequent search of this house also found a large number of SIM cards. (continued below). 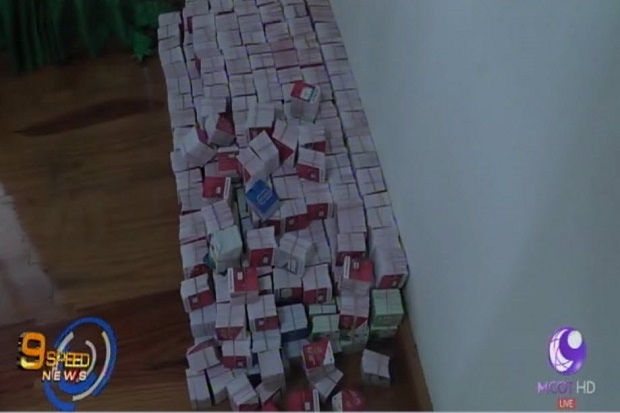 Speaking through an interpreter, Mr Ni said they were not running a call-centre scam, the police's initial assumption. They had been hired to increase Facebook likes and page views of products, and had been doing it for three months.

The hundreds of smartphones were used as bots to falsely increase readership numbers of the pages.

The suspects were charged with overstaying their visas, working without permits and using unregistered SIM cards. They were handed over to Aranyaprathet police.

The seized phones, mostly iPhones, would be examined to determine if they were smuggled or properly taxed, police said. The suspects could also face a charge of smuggling.