Firefighters put out the flames at the Muze pub in Pattaya City Monday evening. (Photo by Chaiyot Putpattanapong)

PATTAYA - A pub caught fire and its roof caved in while it was under renovation on Monday. Four people were rescued with slight injuries.

Local police and fire fighters on 10 fire engines rushed to the Muze pub on Phet Trakul Road in tambon Nong Prue of Bang Lamung district, Chon Buri, at about 5pm after being informed of the fire.

Firefighters brought three men and a woman out of the 300-square-metre, one-storey building. They choked due to smoke and received first aid.

The place had only one opening, which serves as both the entrance and exit. The furniture, electrical appliances and noise-insulation foam on its ceiling and walls allowed the fire to spread quickly.

The firefighters initially showered water to prevent the fire at the pub from reaching a hotel and an apartment building nearby. Residents in the vicinity were evacuated.

About an hour and a half after the fire broke out, the roof of the building collapsed. The firefighters then broke through its wall and put out the blaze inside. Properties in the building were completely destroyed. Damage was estimated at about 10 million baht.

Police said a contractor was hired to renovate part of the pub. The fire erupted when three workers were inside the building and sparks from a welding machine hit the noise-insulation foam on a wall and set it ablaze. 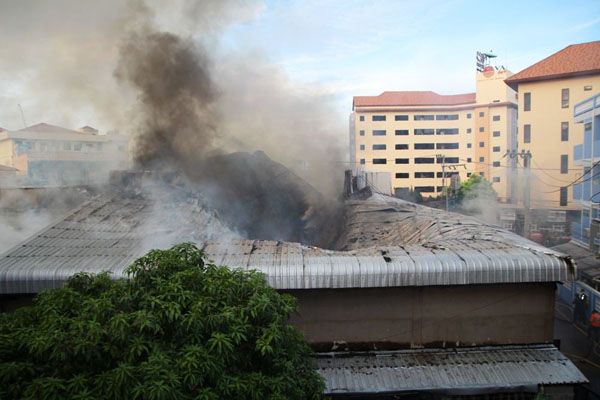 The roof of the Muze pub caves in after the fire raged for over an hour. (Photo by Chaiyot Pupattanapong)

Japan to reopen to all long-stay foreigners

TOKYO: Japan will reopen its borders for all foreign visitors with permits to stay in the country for some time, including students but excluding tourists, from October, Prime Minister Yoshihide Suga said on Friday.

PTT staff to get B5,000 travel subsidies

The national oil and gas conglomerate PTT Plc has set aside 18 million baht for 5,000-baht travel subsidies for its employees, to boost local tourism in the fourth quarter.

State of emergency, controls on visitors for review on Monday

The pandemic situation panel will consider the issue of extending the state of emergency and review regulations for visiting business reps and tourists on Monday.