The van that veered across the road divide and crashed head-on with a pickup truck in Khao Chakan district, Sa Kaeo around dawn on Tuesday, killing 6 people and injuring 11 others. (Photo by Sawat Ketngam)

SA KAEO - Six people were killed and 11 others hurt when a van carrying migrant workers collided head-on with a pickup truck in Khao Chakan district around dawn on Tuesday.

The fatal crash occurred at the intersection in front of Khao Chakan fresh market on Highway 317 (Chanthaburi-Sa Kaeo) inbound to downtown Sa Kaeo, said Pol Capt Saneh Detsupha, a duty officer at Khao Chakan police station. It was reported to police about 5.20am.

Police and rescue workers found a wrecked white Toyota van with Bangkok licence plates stalled on the road. Four people inside the van were dead and 11 others injured.

A black Isuzu pickup truck with Chanthaburi plates was nearby, its front stove in and two people dead inside the cabin.

Witnesses told police the van was travelling at high speed toiwards Chantaburi. It ran into an orange plastic barrier on the road, veered across the dividing strip and crash head-on with the oncoming pickup.

The dead were identified as van driver Rapheepat Sukchit, pickup truck driver Chaipitak Charoenchatupat and his wife Pimwara, and three Cambodian women who had yet to be identified. Five men and six women were injured.

Police said the van was carrying the migrant workers to renew their visas at Ban Laem checkpoint in Chanthaburi. The investigation was continuing. 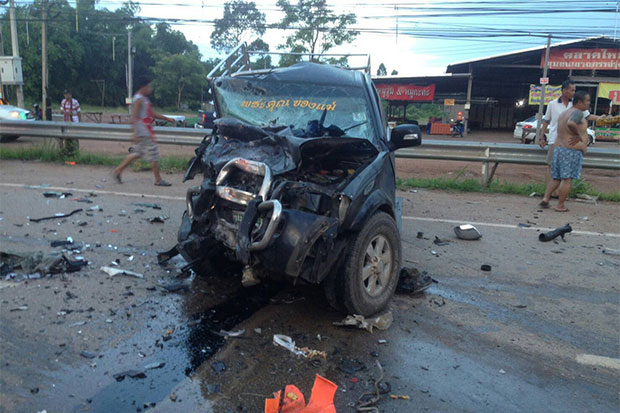 The wreckage of the pickup truck hit by a passenger van in Sa Kaeo on Tuesday morning. (Photo by Sawat Ketngam)

The Rise Of Giovanti Humphries in the Cannabis Industry