Thai envoy elected to Law of the Sea tribunal

Thai ambassador to Russia Kriangsak Kittichaisaree has been elected to a nine-year term as a judge of the UN's International Tribunal for the Law of the Sea, the Foreign Affairs Ministry announced.

The elections were held on Wednesday during the 27th Meeting of the States Parties to the United Nations Convention on the Law of the Sea in New York. 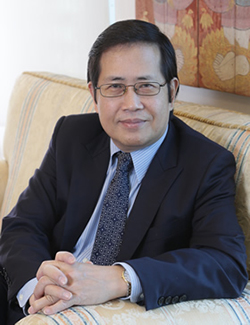 Ambassador to Moscow Kriangsak Kittichaisaree (Image from the embassy's website)

The tribunal is composed of 21 independent members elected from among people enjoying the highest reputation for fairness and integrity and of recognised competence in the field of the law of the sea, the ministry statement said.

The elections were for seven vacancies, two of them  allocated for the Asia-Pacific group, in which Thailand competed against Indonesia, Lebanon and India. The Indian delegate was elected to one seat with 120 votes and Mr Kriangsak to the second with 110 votes.

In elections for the five other vacant seats,  Algeria and the Republic of Cabo Verde (Cape Verde islands) represent Africa; Russia represents eastern Europe; Paraguay represents Latin America and the Caribbean; and the Netherlands represents western Europe and the others group.

Ambassador Prof Kriangsak is the first Thai national to be elected to a judicial organ of the UN and also the first member of the tribunal from Southeast Asia and Oceania.

In its statement, the ministry said Mr Kriangsak’s  election to the tribunal is an important milestone for Thailand’s elevated profile on the international stage and corresponds to the country’s 20-year national strategic plan on enhancing global competitiveness and human resources development.

The tribunal considers issues such as maritime boundary delimitations, sustainable fisheries, marine environment, shipping, the conservation and sustainable use of marine biological diversity of areas beyond national jurisdiction, deep seabed mining and the common heritage of mankind and the realisation of sustainable development goals on life below the water.

MOSCOW: When it comes to looking good, Russian women are happy to splash out, even on a bit of nip-and-tuck plastic surgery.

Police commandos arrested a son of late influential boxing promoter Klaew Thanikul and the father of TV actors Nachat and Natcha Janthaphan, and 14 other suspects, when executing arrest warrants in 12 provinces on Thursday.

The Bank of Thailand (BoT) will hold a media briefing on the policy interest rate and the baht on Friday at 10.30am, as the local currency trades at its weakest level in more than six years against the United States dollar.