When taxes on bottled and canned drinks push up prices on Sept 16, they will go up more for heavily sweetened drinks than others.

The Finance Ministry is set to trim the excise tax for reduced sugar drinks in an attempt to encourage people to consume healthier products and prompt makers to reduce sugar content, says a source at the Finance Ministry.

Drinks that contain less sugar than the Finance Ministry's threshold will be levied a lower excise tax than that for drinks with higher sugar content, the source said.

The tax on sweet drinks is part of the amended excise tax act set to come into force from Sept 16.

Under the amended tax, the levy on drinks with sugar content that has been reduced to the level required by the Finance Ministry will be cut to four baht per bottle from five.

The source said drinks for which 10% of the content is fruit or vegetable juice with sugar content lower than the Finance Ministry's threshold will be exempted from the tax.

But the ministry will impose an excise tax if the drink's sugar volume exceeds the set mark.

At present, the Excise Department exempts drinks with at least 10% fruit and vegetable content.

Artificial mineral water, carbonated drinks and beverages with fruit or vegetable content lower than the 10% requirement are taxed in a range of 20-25%. 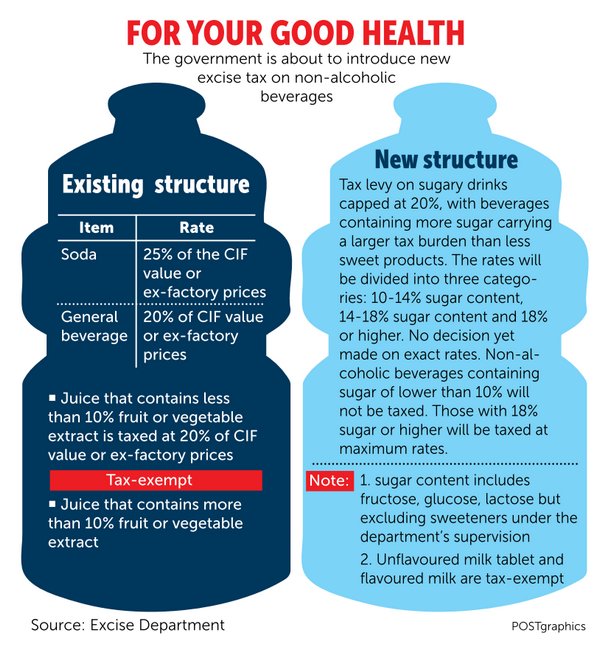 Meanwhile, the source said organic laws for the amended excise tax act are expected to be announced earlier than originally scheduled on Sept 16, due to frequent requests from makers.

The Excise Department is drafting 80 organic laws to elaborate the new tax rates.

The new excise tax law, entailing a tax base computation to recommend retail prices, will replace ex-factory prices and cost, insurance and freight values, which are considered to have loopholes that let manufacturers understate tax payments.

Prachuab Tayakeepisut, vice-chairman of the Thai Beverage Industry Association, said the hardest-hit drinks are likely to be fruit and vegetable juices with natural ingredients, whose market value is 30 billion baht a year.

"Fruit and vegetable juices with natural ingredients have been included in Thailand's excise taxation for a long time, but they are tax-exempt," he said. "Those products will be taxed once the new sugar tax comes into force."

The second hardest hit will be dealt to carbonated and energy drinks, with market value of 50-55 billion baht and 30 billion, respectively.

But Mr Prachuab said the new sugar tax will eventually be passed on to consumers.

Nutthakorn Utensute, director of the Tax Planning Bureau of the Excise Department, said the government is not focused on getting more tax revenue from the new sugar tax.

"The new tax is intended to cut future health expenses for Thais, both from imported pharmaceuticals and medical services," he said.

According to a Food and Drug Administration survey, high sugar consumption results in 198.5 billion baht in losses or 2.2% of the country's GDP each year, mainly from obesity, diabetes and coronary artery disease.