Imagine yourself stuck at a bus stop in Bangkok, and you have to travel to a destination on an unfamiliar route, what do you do? Look for a sign or map at the bus stop to find out which bus to take or where to head next?

For bus users in Bangkok bus stops aren't very practical. The bus stop signs often show only the bus numbers, which are sometimes outdated. Larger bus stops often act merely as shelters to protect waiting passengers from the sun and rain. The walls, which are supposed to show timetables, maps, bus numbers, routes and connections, feature only advertising.

A lack of information at bus stops has always been a problem for Bangkok residents who rely on public transportation. Unless you know which bus to take and where you are heading, bus stop signs are almost useless.

This urban problem is what inspired a group of young people who call themselves "Mayday" to come up with their "guiding bus stop" proposal to help City Hall -- the body responsible for all bus stops in the city -- to make bus stops more practical for users.

Mayday is a small group of young people who want to improve the lives of city commuters by providing necessary information about public transport and connectivity between different transport modes such as boats, trains and buses.

The name of the group, Mayday, is a pun on rot meh in Thai which means bus and also refers to an emergency call for help, implying Bangkok's public transport desperately needs help to improve.

The group released its first batch of graphics, showing how people can get around the city for under 50 baht using public buses, through its Facebook page in late March.

Earlier this month, Mayday did it again. What they did this time was help commuters move around the city without "getting lost" at bus stops, by providing essential information about the various routes and their potential connections. To achieve this, they remodelled two bus stops, both on Ratchadamnoen Avenue, one in front of the old Government Lottery Office and the other at Kok Wua Intersection.

The experiment, which began on June 6, is a collaboration between the group and the Bangkok Metropolitan Administration's Traffic and Transport Department that is responsible for 30,321 bus stops around the capital.

The group has also been allowed by a concessionaire, Yak, to use two of its bus-stop backdrops around Victory Monument to run their experiment. 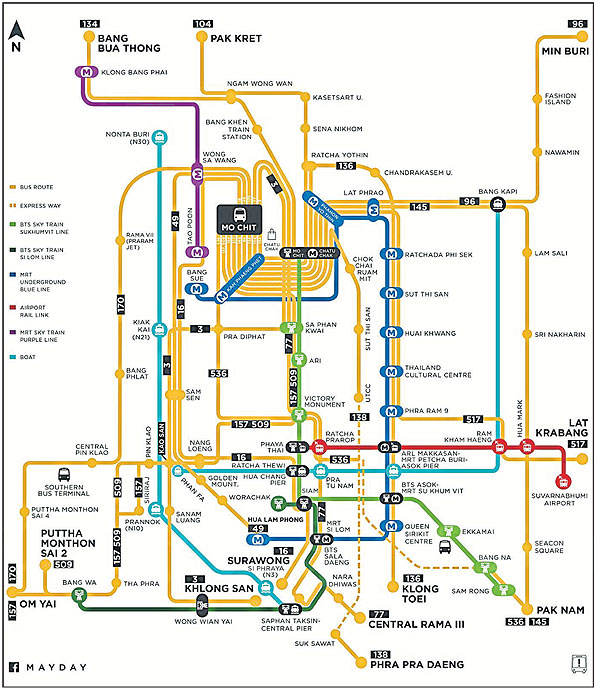 A map showing public transport connections was released by Mayday on their Facebook in early May.

"It all started at the beginning of the royal mourning period last October when a large part of the Rattanakosin area was closed to traffic. People were advised not to drive there as the area was efficiently accessible by bus only," said Suwicha Pitakkanchanakul, a Mayday member.

The current prototype is a result of an experiment last year when public buses were the most effective mode of transport for people to reach Sanam Luang and the old town area. The aim was to allow Thai and foreign visitors to use public transportation more conveniently.

During the period, the group used a bus stop in front of Rattanakosin Hotel to demonstrate the type of practical design they hoped would be adopted more widely. Their sign included details, in both Thai and English, of about 20 buses that passed the stop, with the goal of helping locals who had come to pay homage to the late King and foreigners visiting the old town.

The experiment was well received and the group was invited to present their idea to the Bangkok Metropolitan Administration's (BMA) Traffic and Transport Department in April, which resulted in the two bus stops on Ratchadamnoen Avenue.

Since last October, the group has focused on the Rattanakosin area, but Waritthorn Suksabai, another member, who is a graphic designer and who fell in love with public buses when he was young, said the group hopes to expand their trials beyond the old town.

Born in Bangkok, but raised in Chanthaburi, Mr Waritthorn is drawing upon experience, childhood memories, internet research and on-the-ground exploration, as he tries to validate and collect data on all the bus routes in Bangkok.

The group hopes to elevate Thailand to the same level as other big cities such as London and Singapore, where bus stops feature all relevant information, including timetables and routes.

The director of the BMA's Department of Traffic and Transport, Suthon Anakul, appreciates the effort of the young Mayday members and believes the city and its residents will benefit from the project, which is relatively inexpensive to fund. He also indicated that the current experiment will be used to guide the refurbishment of other bus stops around town if it receives positive feedback from commuters. 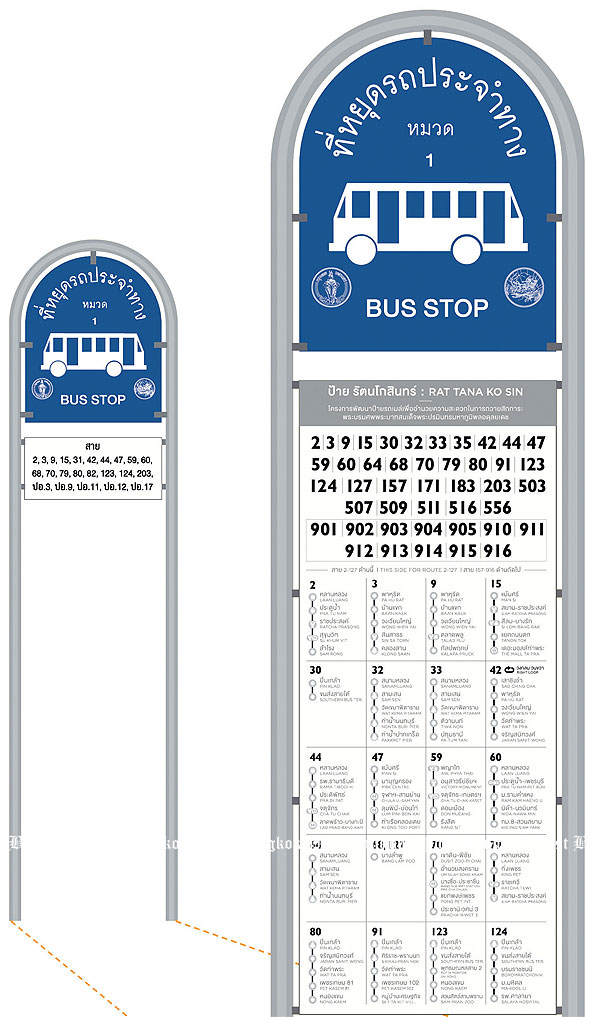 An experimental bus stop shows necessary information for commuters to check which bus they should and could take.  Graphic courtesy of Mayday