A house in Phimai district of Nakhon Ratchasima is decorated for a wedding that never took place after a dispute over the dowry led the groom to flee. (Photo by Prasit Tangprasert)

NAKHON RATCHASIMA: A wedding in Phimai district was abruptly cancelled after a groom and his relatives walked away with the dowry following a quarrel with the bride’s family over the amount.

The incident prompted relatives to take abandoned bride-to-be Benjaporn Wareesri to file a complaint with police against runaway groom Adirek Chadachan on Saturday.

Thongwai Muangmuntri, 64, told police that her niece, an employee of AIS in Bangkok, and her boyfriend from Phichit had agreed to tie the knot as they had known each other for quite some time.

The woman’s family had asked for a dowry of 100,000 baht and one-baht weight of gold (worth around 21,000 baht at current prices) and the man’s family agreed, said Mrs Thongwai. 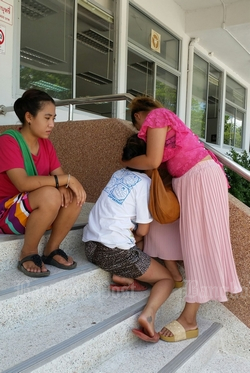 The wedding was scheduled for Saturday morning at the woman’s house in Phimai district. The 25-year-old bride had handed out 100 wedding invitations to guests. More than 50 tables were arranged for a Chinese banquet afterward.

The 24-year-old groom and some 20 relatives and friends travelling from Phichit arrived at the bride’s house in five vehicles early Saturday.

The procession of family members and other arrangements went smoothly in the morning until a problem emerged during the counting of the dowry money.

The bride’s relatives found only 50,000 baht in cash and one-baht weight of gold in the tray of gifts from the groom to the bride’s parents, said Mrs Thongwai.

The two families held talks, with the bride’s family asking the groom to give the remaining 50,000 baht after the wedding. But the groom’s relatives insisted they had given all they could give. A quarrel erupted and the groom and his relatives walked off with the cash and gold and drove away.

The bride burst into tears and fainted, said her aunt. After her niece regained consciousness, they took her to file the complaint.

They said they wanted the man to take responsibility for his actions, which had brought shame to the woman and her family. They also wanted him to pay all wedding expenses.

While police were questioning the woman, her relatives managed to contact the groom on the phone and asked him to negotiate at the police station. However, the groom refused. This sparked a fresh quarrel over the phone before he turned off his mobile phone and left for Phichit.

Pol Lt Denchai Chamnarnnaimuang, deputy chief of the Phimai police station, said police would call the groom in an attempt to settle the dispute.

The initial questioning found that the woman only wanted the man to pay all the expenses incurred from the wedding. The dowry, the family said, was no longer an issue as the wedding had been cancelled.