Thailand rapped for lack of action on torture
Thailand
General

Thailand rapped for lack of action on torture

Amnesty International planned a press conference last September to highlight allegations of torture in post-coup Thailand. Authorities threatened to arrest and prosecute participants if they went through with the event. (File photo by Somchai Poomlard)

Amnesty International and the International Commission of Jurists have called on Thailand to follow through on its commitment to prevent torture and ill-treatment.

The two bodies said Thailand had pledged 10 years ago to respect and protect the rights of all people to be free from torture and other ill-treatment by ratifying the Convention against Torture. But the organisations said they remained concerned that torture remains prevalent.

Despite Thailand expressing commitments to uphold its obligations under the convention, these promises remain on paper only, having yet to be turned into action, a joint public statement released yesterday said.

"Laws and executive orders allowing individuals to be held by military personnel in unofficial places of detention, without judicial authorisation or access to lawyers, family members or medical personnel for up to a week, creates conditions that facilitate torture and other ill-treatment," the statement read. The bodies called on the government to amend or repeal such laws and orders.

On Monday, AI's Thailand branch, Amnesty Thailand, tweeted a series of statements backing the call for the government to take action on the Convention against Torture.

Late Monday, for example, Amnesty Thailand tweeted that "Thailand Must Follow Through on Commitments to Prevent Torture and Ill-treatment #StopTorture"

The organisations also expressed concerns about delays to the passage of the Prevention and Suppression of Torture and Enforced Disappearance Bill.

The bodies said the Thai government should make good on its commitment to eradicating torture by addressing shortcomings in the act and prioritising its passage into law.

The ICJ, in its own Twitter feed, expressed the same opinion.

"#Thailand must follow through on commitments to prevent torture and other ill-treatment," it said

#Thailand must follow through on commitments to prevent torture and other ill-treatment, @ICJ_org, @amnesty - https://t.co/sbX1g7s6Qs 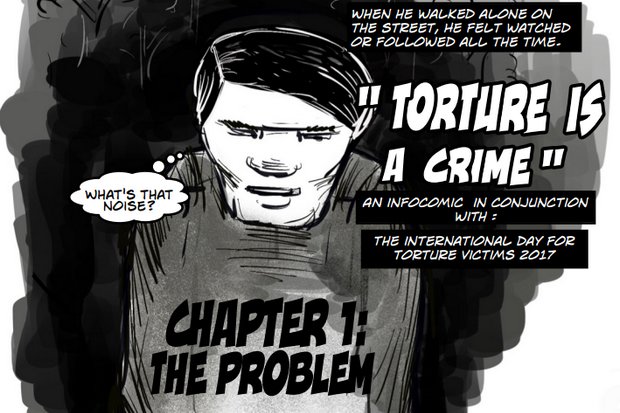 The comic is available for free in PDF format in English and in Thai.

Justice Minister Suwaphan Tanyuvardhana said the United Nations reported 82 people had been subject to torture or enforced disappearance in Thailand.

Formed on May 23, a committee dealing with complaints about torture and enforced disappearance will consider cases both past and present, he said.