Thanong: 'I'd do the same again'
Thailand
General

Thanong: 'I'd do the same again'

TOUGH JOB: Thanong Bidaya (centre) in 1997 when he was the finance minister who decided to change the currency regime.

Former finance minister Thanong Bidaya has insisted he made the right decision in opting to float the baht in July 1997.

"If I could go back in time, I'd do the same," Mr Thanong said in an exclusive interview with the Bangkok Post to mark the 20th anniversary of the Asian financial crisis, which erupted from Thailand.

"There was no other alternative," he said.

Mr Thanong decided with the Bank of Thailand to end the decades-long currency peg to the US dollar and adopt a managed floating exchange rate as the financial crisis hit its crescendo.

This caused the Thai currency to plummet from 25 baht to 56 baht against the greenback before it levelled off at about 40 baht. Businesses collapsed like rows of dominoes due to the sharp increase in debts resulting from the drastic depreciation of the baht.

First, the country was looking at huge foreign debt of about US$105 billion. Compared to its foreign reserves of $25.5 billion, it was not in a position to make good on the loans.

Second, the government was dealing with a sorely depleted foreign currency reserve in its fight against speculative attacks by hedge funds. It did not have enough credit to borrow.

Third, corporate debt had gone through the roof. This was partly due to the launch of the Bangkok International Banking Facility (BIBF) scheme in 1993 which allowed the private sector to seek loans overseas for trade and investment and made use of the wide gap between Thai and US interest rates.

According to Mr Thanong, the Inter- national Monetary Fund (IMF) warned the government in 1994 to switch over to a more flexible exchange rate but no action was taken.

The speculative attacks on the currency began in 1995 but were not intense at the outset. However, concern was raised about the stability of the finance sector starting with the Bangkok Bank of Commerce debacle in 1996.

When the Chavalit Yongchaiyudh administration came to power in 1997, the real estate sector was being rocked. Many faced serious liquidity problems and defaulted on loan repayments.

In May of that year the IMF suggested the baht should be depreciation but the call went unheard. Amnuay Viravan resigned as finance minister in the middle of June and Mr Thanong was approached to assume the post.

He said that upon taking office the Bank of Thailand proposed 16 finance companies be shut down. He decided to go with the managed float on July 2.

"We didn't have any other choice. Anyone who was in that position would have done the same," he said.

"If we hadn't, we would have had to stop repaying loans [and] we would have been forced by economic giants like Argentina or Mexico to liquidate state-owned businesses in order to pay off loans."

Mr Thanong accepted a bailout programme from the IMF in August but resigned in October following the fallout of a two-baht increase in the price of gas to offset the deficit.

The Chavalit administration resigned under intense pressure and the Chuan Leekpai government stepped in. The Democrat-led administration focused on the rehabilitation of the banking sector.

Mr Thanong said he took a beating for over a decade but the country ultimately benefited from his decision.

In an interview with the Post, Mr Chuan, a former prime minister, said he was honoured to have worked with his cabinet members in solving the financial crisis.

He enlisted the help of three economic experts, Tarrin Nimmanahaeminda, Supachai Panitchapakdi and Pisit Lee-atham, and formed what was later dubbed the "economic dream team".

The trio quit the private sector and hefty pay cheques to join the Democrat administration to turn the financial crisis around, he said.

"We were already in the IMF bailout programme when the Democrat government assumed power. We reduced the instalments from twelve to eight and started repaying some. While that gave us some credibility, we had to scrape money from other resources and pay high interest rate. So it didn't look a good deal at the time," he said.

"We had an economic crisis but not social turmoil. Those affected returned home to join the agricultural sector and followed the late king's self-sufficiency economy."

Mr Chuan said the 1997 economic crisis could have been averted if the public and private sectors had operated good governance. But this principle was introduced and embraced too late, he added.

Mr Tarrin, a former finance minister, once said the crisis could have been sidestepped if the Thai authorities had moved aggressively to float the baht when reserves were still largely intact.

He said that had there been disclosure of the Bank of Thailand's swap positions at the time of the baht defence, the situation would have played out much more favourably.

After the baht was floated in July 1997, the Chuan government and the central bank opened negotiations with the IMF to help bring down interest rates. Rates had been kept high at the start of the crisis to help counter capital flight.

In a previous interview with ThaiPublica, he said he had to fix this dire financial problem.

"The situation that I faced was excessively high interest rates, no financial liquidity on the market and depleting foreign exchange reserves from $40 billion to virtually zero."

He said it was necessary for Thailand to swallow the bitter pills prescribed by the IMF to obtain standby credit.

"When we lacked foreign exchange reserves, it effectively relegated us back to the Stone Age because we couldn't trade with international markets," he said. 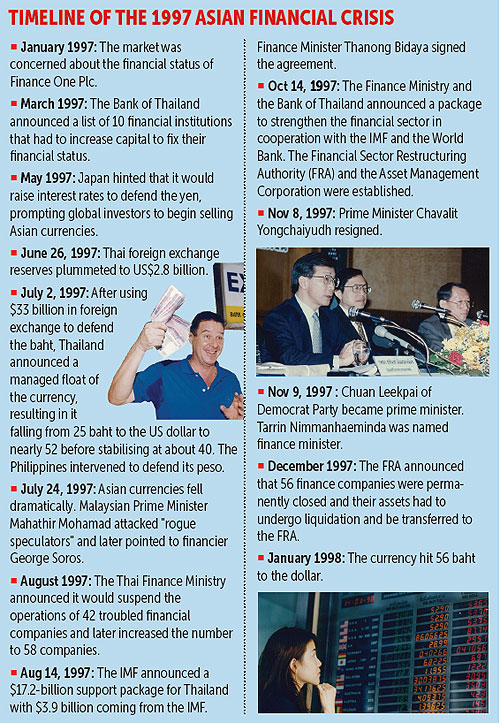