Migrants line up to register at an immigration centre. A new 15-day blitz programme requires all employers of all migrant workers including maids to apply for new papers. (Bangkok Post file photo)

People involved in the employment of unregistered migrant workers will have 15 days to apply for their recruitment after the new labour law was suspended for 180 days, said a senior labour official.

Waranont Pitiwan, chief of the Department of Employment, said employers are being encouraged to submit applications at service centres to be set up across the country for this purpose.

They are also being urged to provide any document to prove the unregistered workers had been employed for some time, he said, adding that Labour Minister Sirichai Distakul is expected to sign an order on the issue soon.

Mr Waranont said the centres will be up and running for 15 days and 10 of them will be in Bangkok.

"The 15-day period is not too short or too long for them to hand in application forms and other documents, if any, to prove the migrant workers had been in their employment for some time," he said. (Story continues below) 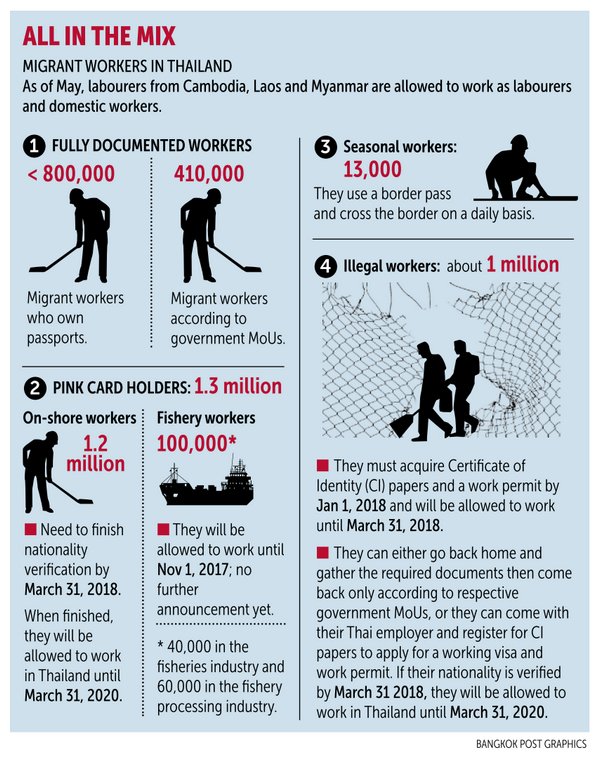 He said Myanmar has agreed to send officials and equipment to process Certificate of Identity (CI) forms at six One Stop Service Centres in five provinces, two in Samut Sakhon and one each in Tak, Chiang Rai, Chiang Mai, and Nakhon Sawan.

CI papers are required for the application of visas and work permits.

If the workers get the CI papers, they can continue working in Thailand until March 31 next year.

They can continue working in the kingdom for two more years only if they have verification of their nationality.

Prime Minister Prayut Chan-o-cha insisted Wednesday the government will not abolish or amend the new migrant labour law, saying the 180-day grace period should be enough.

"The government has been working on the issue for three years but the problems remain. As for the harsh penalties, the Labour Ministry is being asked to consider making them more lenient," he said.

The 180-day reprieve has been granted to ease panic and an exodus of migrant workers caused by harsh punishments imposed by the executive decree which took effect on June 23.

At a seminar organised by the ministry to discuss the new law, Sompong Srakaew, director of the Labour Rights Promotion Network, said the grace period is a challenge for the government to bring undocumented workers into the system.

However, he said the new law is likely to affect SMEs as those who would return home were hired by this sector.

Lae Dilokwitthayarat, a labour economist at Chulalongkorn University, said the law has been introduced to appease the international community, but it is useless if not enforced.

He said the public has little interest in the content of the law and is focusing more on the harsh penalties.

The seminar drew more than 1,000 particiants including business operators and labour activists who expressed concerns about the harsh penalties, including imprisonment, and argued that it is wrong to criminalise employers and workers.

The law stipulates harsher punishments for both civil and criminal wrongdoings associated with the illegal hiring of migrant workers, with fines ranging from 400,000-800,000 baht.

The National Legislative Assembly will today debate and vote on whether to approve the executive decree without authority to change it.

If endorsed the decree will be upgraded into an Act.

Otherwise, the executive decree will be dropped and its effect will be revoked.