Rescue workers take a badly injured owner, 62, of a pit bull to a hospital. The man sustained multiple bite wounds on his body while his wife, 62, was also injured. Their pit bull dog was also hurt as the wife, armed with a knife, came to the rescue of her husband during the attack. (Photo by Pongpat Wongyala)

PATHUM THANI - A couple were injured, one seriously, after their pit bull terrier attacked them at their house in Khlong Luang district early Thursday.

Mrs Somporn Chaisrisawat, 62, was found with severe dog bites on both her hands on the first floor of her two-storey townhouse at Pruksa housing estate 12 in tambon Khlong Sam when rescue workers rushed to the house after being alerted shortly after midnight. 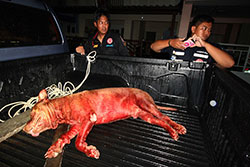 Not far from the woman, her husband Wiwat, 62, was found with multiple bite wounds on his body. He was found unconscious in the bathroom.

The couple were rushed to a nearby hospital. Their injured pit bull was found in a pickup truck of a relative who was about to take the dog to a hospital.

Mrs Somporn said she and her husband were inside the house at the time of the attack. Before the attack, their dog did not show any sign of aggression or irritation. She later went upstairs while her husband took a bath on the first floor.

She later heard her husband shouting, prompting her to go downstairs. She found him being attacked by the pit bull. She immediately grabbed a knife to help her husband but the dog bit her hands. She then called her neighbours to alert rescue workers and phoned her son to take the dog to see a veterinarian.