Teacher said to flog 7-year-old is 'absent' from school

SURIN - The 57-year-old teacher who allegedly badly beat a seven-year-old pupil over a pen was absent from work on Friday, while his superior was ordered to finish his investigation into the case next week.

Pol Lt Col Porawet Krawenkit, an interrogator from the Sangkha police station, arrived at Ban Huai Poon School in Sangkha district to question staff after the boy's family accused teacher Sangworn Harnpitak of brutally beating the grade one pupil with a tree branch.

The officer did not see Mr Sangworn as he was absent from work, but questioned other teachers who witnessed the incident. Pol Lt Col Porawet said he would issue a summons for Mr Sangworn.

The interrogation began after the boy's grandmother posted a picture on Facebook showing numerous welts on his back and arms. The post was later shared via social media.

Khampoon Boonchern, director of primary education in Surin, visited the boy's family and gave them 3,000 baht to boost morale. He said he ordered the school's head to finish his investigation into the case by early next week so that disciplinary and criminal actions could be taken.

The official gave them 1,000 baht and some consumer products as initial assistance, and promised to arrange additional social welfare support for the family.

She also said that other pupils had bullied her grandson, staining his school uniform with oil paints and painting his face like a cat. 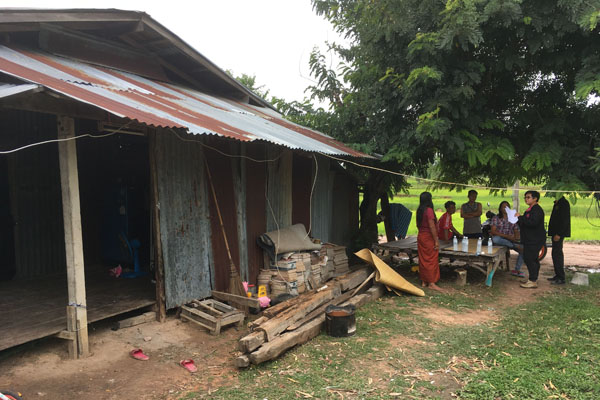 The boy's house in Sangkha district