A police officer looks at a chart showing the relationships of people involved in a tourist death on Koh Tao at a briefing on Friday. (Photo by Supapong Chaolan)

SURAT THANI: Police and administrative officials have taken a proactive approach to restoring the reputation of Koh Tao by clarifying the details of investigations into the deaths of seven foreigners over the past three years.

In a briefing at provincial police headquarters on Friday, senior officers gave details about all six cases, involving seven deaths in total, since 2014. It was attended by the police liaison officer of the Belgian Embassy as the latest case involves a Belgian woman.

The tourist island has come under a harsh spotlight since reports emerged two weeks ago about the death of Elise Dallemagne of Belgium. Her mother cast doubt on the local police conclusion that the death was a suicide, and the investigation has been reopened.

Of the six other cases, five have been solved, said Surat Thani police chief Pol Maj Gen Apichart Boonsriroj, who detailed them one by one.

In the first case, the body of Nick Pearson, 25, of Britain, was found floating near the beach at the Hillside Resort Koh Tao on Jan 1, 2014. Forensic doctors found he had drowned after falling into the sea while drunk. His father did not press for a further investigation and did not request an autopsy.

In the second case, British tourists David Miller, 24, and Hannah Witheridge, 24, were found bludgeoned to death on a beach on Sept 15, 2014. Two Myanmar nationals -- Zaw Lin and Wai Phyo -- were charged based on DNA results. They were convicted and sentenced to death and the Appeal Court upheld the ruling. The window for an appeal to the Supreme Court has closed without one being filed and the case was closed, said Pol Maj Gen Apichart.

The investigation of the Witheridge and Miller slayings was widely criticised as the crime scene was not properly secured, and questions were also raised about subsequent DNA testing. 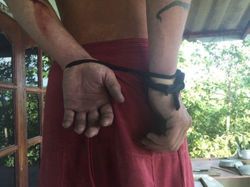 A police photo shows how the hands of French national Dimitri Povse, 28, were tied when officers found his body hanging at a house on Jan 1, 2015. (Royal Thai Police photo)

The third case involved Dimitri Povse, 28, of France. His body was found hanging from the beam of a rented house on Jan 1, 2015. Although both of his hands were tied behind the back, the police said he could have done this himself as the rope was tied to one hand and a loop was made so the other hand could be inserted. They also found a suicide note at the scene. A woman Povse had been interested in said he had called her twice on the phone that night but she had not picked up because she had been asleep.

In the fourth case, the body of a British woman, Christina Annesley, 23, was found in a room at the In Touch Resort on Jan 21, 2015. There were no signs of a struggle or rape, or other human DNA. The cause of death was circulatory failure caused by taking drugs and alcohol.

In the fifth case, Briton Luke Miller, 26, drowned in a swimming pool at Sunset Bar on Jan 6 this year after striking the diving board from which he was jumping.

In the sixth case, Valentina Novozhyonova, 24, disappeared on Feb 16 this year with her diving gear. The last known video footage of the Russian woman showed her walking to Chaloke Hin Kao bay and never coming back. Police concluded she wanted to break a deep diving record at more than 24 metres.

In the latest case, the body of Dallemagne, 30, was found hanging from a tree on April 27. The investigation is ongoing with 14 witnesses questioned so far and four more scheduled to be interviewed. So far, there have been no indications that show she might have been murdered, Pol Maj Gen Apichart said.

Pol Maj Gen Pornchai Sutheerakhun, director of the Institute of Forensic Science at Police General Hospital in Bangkok, said forensic doctors were with police at the scene and Dallemagne's body was sent for an autopsy.

“There were wounds around the neck due to the hanging and some non-fatal bruises in the head and no drugs were found in the body,” he said.

“In the Dallemagne case, the cause of death was suffocation. There were no signs of fighting or a struggle, nor were foreign objects or substances that could cause loss of consciousness found in the body," he said.

“Some news reports pointed to a 'mafia gang' on Koh Tao but I assure you, after cooperating with the governor, military and police who have taken part in maintaining order here, there is no such gang on the island, nor are there conflicts of interest. If anyone has proof to the contrary, please contact the governor or me."

Surat Thani governor Auaychai Innak dismissed as untrue some foreign news reports which claimed reptiles had eaten half of Dallemagne's body. He also said several local residents and even some tourists even volunteered to take legal action against the news outlets.

He insisted that tourist security on Koh Tao was good. We will recheck all closed-circuit cameras to make sure they are in order,” he said

As well, he said, that the opening of a new 10-bed hospital with 12 doctors and nurses to deal with emergencies would further improve confidence.

Suthee Sukanonsawat, president of the Hotels and Tourism Promotion Club of Surat Thani, said the foreign news reports were untrue and had tarnished the image of the island.

Koh Tao authorities this week said they intended to file defamation and computer crime charges against the news website Samui Times, which has frequently referred to Koh Tao as "Death Island".