Master of technology guards the gates

Pol Lt Gen Nathathorn Prousoontorn, author of the now-familiar policy as chief of the Immigration Bureau: Good guys in, bad guys out. He has led crackdowns on foreign criminals seeking to hide out in Thailand, such as four Russians caught last March in Pattaya. (Photo by Pawat Laopaisarntaksin)

A look at the educational background of Immigration Bureau chief Nathathorn Prousoontorn can easily give the impression he pursued an academic career first rather than a career in the police force.

In fact, his senior rank in the immigration service might follow naturally from his solid academic grasp of science and computer technology, two areas in which immigration hopes to take new steps as it introduces tougher measures to screen undesirable elements from entering the country.

Pol Lt Gen Nathathorn is looking forward to the introduction in the next two months of a comprehensive computer-based screening system called Biomatrix, a fingerprint, face and eye scanner which should help overcome the traditional problem of crooks travelling on fake passports.

The immigration chief says modern technology not only ensures efficiency in blocking foreign criminals from entering the country, but could also help tackle crooked officers because they will be replaced by what he believes will be unbiased machines.

A scientific approach is in keeping with Pol Lt Gen Nathathorn's academic background, which perhaps makes him ideally suited to shepherd in the new system at the country's main airports and border passes.

He earned a masters degree in science with a focus on computer technology from Chulalongkorn University, a rare shift from the police field into science.

That is just a part of his academic journey. The Chachoengsao native was earlier admitted to Thammasat University's Faculty of Law after graduating from high school, but decided to opt for a career in the police force by enrolling at the Royal Police Cadet Academy instead.

After practising interrogation skills as a deputy police inspector of Pathumwan station in Bangkok, he went abroad to do a masters degree in public administration at Kentucky State University.

His thirst for knowledge at the graduate level then led him to earn two more masters degrees at Chulalongkorn University, including study in the field of the arts including Thai and English translations.

Yet his joy of learning did not stop. He took it another step further, earning a doctorate degree in political science at Chulalongkorn University and, going back to his earlier interest in law, a bachelor's degree in law from Ramkhamhaeng University.

These are only examples of his learning journey, which also includes short training courses in the police field which he attended abroad. 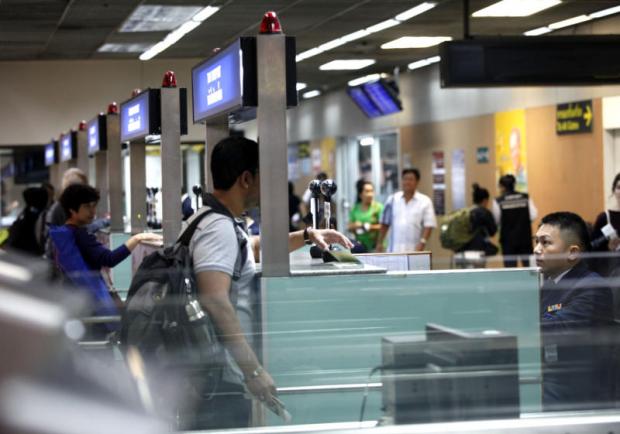 In his Immigration Bureau job, his language skills aid his cooperation with foreign immigration police.

But it is Biomatrix where he hopes to make the most progress in screening out foreign criminal suspects, often pretending to be tourists.

The equipment will help officers carry out their work, ensuring more accurate outcomes.

The machines, in Pol Lt Gen Nathathorn's view, are like well-trained police reinforcing the work of his Immigration Bureau, which is a security front gate to the country.

With Biomatrix and ongoing crackdowns on suspicious foreigners, the bureau chief hopes his aim, which sounds simple but requires strenuous efforts, will be achieved.

"My target is good guys in, bad guys out," Pol Lt Gen Nathathorn said, arguing a mix of modern technology and manpower can pave the way for success.

Many transnational criminal suspects eye Thailand as a hideout where they hatch illegal activities from passport forgery to drug trafficking. According to the bureau, their numbers are rising at an alarming rate.

"We've nabbed so many suspects that we feel the arrests we've made are quite historic," said Pol Lt Gen Nathathorn, who was appointed bureau chief in 2015.

These people must be "cleared out of Thai society as soon as possible," Pol Lt Gen Nathathorn insisted.

If they are bad, his agency ejects them, sends them back to their home countries and puts their names on a black list.

This method ensures faster action than removing them under the criminal deportation law which is more time-consuming.

Pol Lt Gen Nathathorn also hopes to clamp down on dishonest behaviour by immigration police and, in this respect too, technology will play an important role.

The idea is to use machines to do certain jobs which officers can exploit for demanding bribes.

Reflecting on his job, Pol Lt Gen Nathathorn said he is happy with his role. It allows him to introduce better management of foreign tourists and immigrant workers drawn to Thailand because of the attractive pay.

The rank of immigration commander is all he aspires for. "I don't want to think any further as the path towards national police chief is difficult," Pol Lt Gen Nathathorn said.