Papke Nico is rushed to a local hospital in Phuket on Sunday after he tried to take his own life while being arrested for allegedly killing his Thai girlfriend and concealing her body. (Photo via Achadtaya Chuenniran)

PHUKET - Doctors on Monday saved a German who cut his throat while being arrested for allegedly killing his Thai girlfriend and dumping her body in a Phuket ravine early this month.

Nico Papke, 35, was rushed to Wachira Phuket Hospital Sunday afternoon after he used a cutter to slash his throat when police were arresting him at his rented house in tambon Rawai of Muang district.

Police suspect him of murdering Pitcha Namphadung, 35, whose body was found wrapped in a blanket, a bed sheet and a mat and dumped in a forested ravine on Muang Chao Fa Road in tambon Wichit of the same district on Sunday.

"After a surgery, he's safe but is still unable to talk to police pending his recovery," Pol Col Akanit Dan Pitaksat, investigative chief of Phuket, said on Monday. He led subordinates to arrest the German Sunday evening just after the body had been found. 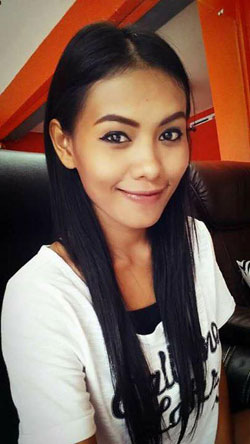 The photo of Pitcha Namphadung, 35, posted on the Facebook by her niece Rujirada Onkhorat, who asked for clues about her missing aunt on July 7. (Photo via Facebook user R'foray Rujirada)

Media reported Pitcha went missing on July 1 after having a quarrel with the German. Their relationship started about five months ago.

Police found her body by following the GPS record of a rented vehicle the man used. Her face was smashed and there were stab wounds on the left side of her body. Police estimated she had been killed about seven days ago.

Both had stayed in their rented room in tambon Rawai for about a month. Witnesses said they had often argued due to the man's jealousy.

Before her disappearance, the woman reportedly tried to end their relationship. Their argument became violent on June 30. She was last seen on July 1.

The disappearance became viral when her 19-year-old niece Rujirada Onkhorat posted a request for clues about her missing aunt on July 7, when police began their investigation.

The victim, the breadwinner of her family, had an 11-year-old daughter who lived with her maternal grandmother, 63, in Kamphaeng Phet.

The grandmother was quoted as saying that Pitcha had a financial problem and sold her car to pay for everyday expenses. She transferred 5,000 baht to her mother on June 30.