Historic Paruskavan Palace has been the official home of the National Intelligence Agency (and its predecessor, the Department of Central Intelligence) since Plaek Pibulsonggram was prime minister in the early 1950s. (Photo nia.go.th)

The security commission led by Deputy Prime Minister Prawit Wongsuwon has approved another reform plan aimed at improving the government's intelligence work by buttressing it with information compiled by a network of 27 agencies.

It also approved a plan to create an app to decode encrypted information classified as confidential and related to national security, National Security Council secretary-general Thawip Netniyom said after the commission met Wednesday.

The 27 agencies, some of which are state enterprises, have much useful data but this would be optimised if they were interlinked to help identify threats, he said.

Intelligence work is mainly overseen by the National Intelligence Agency under the Prime Minister's Office. 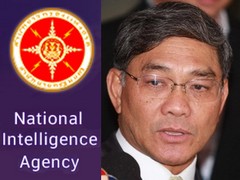 The plan will be forwarded to the steering committee on security reform, agriculture, natural resources and reducing social inequality for consideration.

The commission is one of six panels appointed by the cabinet to mull reform plans covering a range of subjects from the legal system and economy to public health.

Gen Thawip said yesterday's meeting was informed of a master plan on national defence, as proposed by the Defence Ministry, which wants military research and development ratcheted up.

He also spoke about his successor as he is scheduled to retire this October.

Gen Thawip has nominated his deputy Somkiat Sriprasert for consideration by Gen Prawit, as Mr Somkiat is the only deputy whose term does not end this year. Two other deputies are due to retire in 2017.

When asked whether the top job at the National Security Council should be given to a military or non-military authority, he declined to comment.

As outgoing secretary-general, he said he can nominate an official but selection must be left to people higher up the chain.