If the tax exemption threshold is slashed from 50 million baht to 20-30 million baht, the number of housing units affected will be doubled. (Bangkok Post file photo)

A cut in the proposed land and buildings tax exemption threshold from 50-million-baht for main homes is on the cards to expand the taxpayer base, says Deputy Finance Minister Wisudhi Srisuphan.

The tax rate for homes valued below 50 million baht is also likely to be lower than the 0.05% planned levy for those with appraisal value in a range of 50-100 million in an attempt to avert opposition from taxpayers, he said.

If the tax exemption threshold is slashed to 20-30 million baht, the number of housing units subject to the new property tax will be doubled, Mr Wisudhi said.

The Finance Ministry said in 2013 that there were only 11,000 houses valued at more than 50 million baht, while 96.5% of the total homes had appraisal prices below 5 million.

A main house is defined as a residence where the owner's name appears on the household registration, while others are classified as second homes.

A draft bill on the land and buildings tax is being vetted by the National Legislative Assembly's (NLA) committee. That process is set to take around 45 days, after which the draft will be submitted to the NLA for approval in its second reading, said Mr Wisudhi.

The tax payment is expected to go into effect next year, he said. 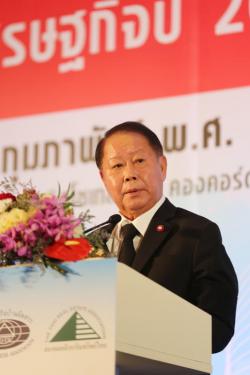 Most of the NLA's committee, however, has asked to lower the exemption threshold, saying that it is too high and only a handful of homes will be liable for the tax.

The draft bill calls for the tax to be levied on main homeowners and farmland appraised at more than 50 million baht. A tax rate of 0.05% will be applied to first homes and agricultural land worth 50-100 million baht, and a 0.1% rate for homes above 100 million.

People owning second homes will be taxed in a range of 0.03-0.1% of the appraisal price, depending on the value of the property.

The tax on vacant land will rise by 0.5 percentage points every three years, up to a cap of 5%, while land for commercial and industrial use will be levied at 0.3-1.5%.

The land and buildings tax, which will replace the outdated house and land tax and the local development tax, is aimed at narrowing income disparity, expanding the national taxpayer base, increasing tax income for local administrations and improving land use.

Mr Wisudhi said that the NLA's committee has also proposed charging a lower tax for first homes with appraisal prices of more than 30 baht million than for the rate homes valued over 50 million.

The tax rate for residents with assessed value of more than 50 million baht will remain unchanged from the level proposed in the draft bill, he said.

The Finance Ministry's Fiscal Policy Office earlier estimated that the land and buildings tax will generate 64.2 billion baht a year for local administrations, up from 25.9 billion from the house and land tax and the local development tax. Undeveloped land and land for commercial and industrial uses are expected to be the main sources of the new tax.

In a related development, the Treasury Department has already appraised 18.6 million land parcels, representing 60% of the 32 million land plots across the country.

To comply with the implementation of the land and buildings tax, the Treasury Department will replace appraisal prices for block areas with land parcels to make property tax evaluation fairer.

Prasert Taedullayasatit, president of the Thai Condominium Association, said the impact will be on homeowners in prime locations where land prices have soared.

"Owners of houses or condos valued at 20 million baht or more mostly buy them as second or third homes," he said. "The tax impact will be very minimal on this segment."

Surachet Kongcheep, associate director at the research department of property consultant Colliers International Thailand, said collecting taxes on residential units valued at 20-30 million baht will have no impact on the mass market.

"With this regulation, the government is trying to compromise with everyone after the NLA suggested that there are too few residential units valued at 50 million baht or more."

He said such residential units only represented 3-4% of the total. Those valued at 20 million baht or more accounted for 10%.