Uncle Pui, here with a cockroach on his tongue, was tolerantly viewed as an eccentric, but his neighbours are getting more serious about his transgressions. (Photos by Wichan Charoenkiatpakul)

Weerasak Sunthonjamorn, also known as Uncle Pui, has been feeding more than 200 pigeons at his home in a busy Bangkok district for more than three decades.

Although the 61-year-old man views this as a form of merit-making, his neighbours think otherwise.

Recently, some of his neighbours have turned to social media to vent their frustration with Mr Weerasak, whom they brand "a crazy birdman".

What bothers his neighbours is not the fact he has been feeding the birds, but rather the smell of bird droppings which they say can be intolerable when they are mixed with unsanitary water, dead pigeons, and spoiled food he had left for the birds. 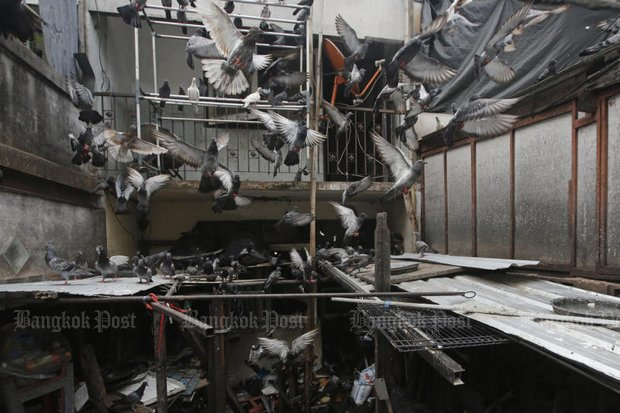 A flock of pigeons fly out of the home of Weerasak Sunthonjamorn, or Uncle Pui, who has been feeding the birds for years. Neighbours complain about the lack of sanitation and the smell of the bird droppings.

The social media posts thrust Mr Weerasak into the media spotlight. His townhouse is in Soi Udomsuk in Sutthisarn.

The Bangkok Post visited Mr Weerasak and found a rundown house squeezed in between the homes of his neighbours.

The first thing you notice are the hundreds of pigeons. They are everywhere in his house, at the front, on the roof, on the electricity wires, and some were around the neighbours' houses. They come for one thing, food.

"Don't ask me how I feel. You can see for yourself. I've had to put up with this smell from bird droppings for more than a decade. I've confronted him about this but he told me to sue him or go to the police. Every time I try to sort things out with him, he curses me and tells me to go away. I have no good words to say about this man," said one next door neighbour, who did not wish to be named.

It all started in 1995 when Mr Weerasak went to Sanam Luang each day to feed thousands of pigeons. His merit-making became a daily routine until he could not go there every day because he was getting too old to travel regularly.

So he started transforming his house into a big canteen for the birds 10 years ago.

He spends at least 3,000-5,000 baht a month on bird food. He earns money from collecting garbage and selling it. Many unsold items are placed here and there in the house.

Mr Weerasak showed an old book about birds which identified him as a member of an animal support group between 2003 and 2005.

Even though he is no longer an active member, he said it was part of his mission to take care of needy birds for life.

"That's why I have to feed them. If I don't do this, no one else would," Mr Weerasak said.

Mr Weerasak lives alone. His wife and children left him partly because they could no longer live with the birds. They never return for financial assistance.

All the money he makes, he spends on animal food. Besides the hundreds of pigeons, he has also adopted 12 cats and one dog.

"I buy food for my animals but I get to eat free food at a temple nearby. They give me food every day. Some restaurants and convenience stores around here also leave stale bread in their bins. I collect it to feed my birds every day," Mr Weerasak said.

After his story went viral on social media, the Bangkok Metropolitan Administration (BMA) sent officials to take care of the sanitary problem.

They came to inspect the house and cleaned the front yard that was filled with items he had hoarded, as well as rotten garbage, cockroaches and flies.

A medical team also went to check on Mr Weerasak's health. He is scheduled to go to a hospital for a lung examination. The bad smell of droppings and birds' feathers were everywhere.

A flock of pigeons fly out of the home of Weerasak Sunthonjamorn, or Uncle Pui, who has been feeding the birds for years. Neighbours complain about the lack of sanitation and the smell of the bird droppings.

The BMA responded swiftly to his neighbours' complaints on social media, but it is not enough.

Dr Patarapol Maneeorn, widely known as Mor Lot, a veterinarian at the Department of Natural Resources, Wildlife, and Plants said every public health unit has to help in this case.

"Pigeons and pets at Mr Weerasak's house should be checked thoroughly to make sure that they don't carry any deadly diseases. What I worry more about is the possible outbreak of a new disease. Research shows that 75% of new diseases in the world come from animals," Dr Patarapol said.

"It would be bad if a virus mutates and creates a new disease the world doesn't know about and there's no cure for it," he added.

Dr Patarapol also says cleaning the house and getting rid of the birds at one fell swoop would do more harm than good.

The animals could become agitated. When an animal is agitated they can release diseases through their faeces or urine. These diseases can be harmful to human beings, he said.

"Currently, people are criticising Mr Weerasak for the pollution he's created. But instead of cursing and charging him for breaking the law, someone should give him a lesson about hygiene," Dr Patarapol said.

"He believes he is doing the right thing and is proud of what he has done. But now it's time to offer him some help to make his home and the whole neighbourhood safe from unwanted diseases."