Bomb and forensic experts inspect the scene of a motorcycle bomb blast on a bridge in Sungai Kolok district on Saturday morning. (Photo by Waedao Harai)

Two policemen and a woman were hurt when a motorcycle bomb went off on a bridge in Sungai Kolok district of Narathiwat on Saturday morning.

The blast went off as a team of 11 police on board two motorcycles and a patrol vehicle drove across the Ban Pupor bridge in tambon Munor, said Pol Capt Chatchai Piyanusorn, deputy investigation chief at the Munor police station in Sungai Kolok. The attack was reported at 9.10am.

Robeesa Maema, 41, a civilian riding a motorcycle behind the patrol team, sustained shrapnel wounds to her left arm. They were taken to a nearby hospital.

Police, soldiers and and forensic officials found pieces of the motorcycle used for the attack with Narathiwat licence plates and debris from the bomb scattered over the area.

Experts said the bomb, stuffed in a 10-kilogramme cooking gas cylinder that had been halved, was detonated by a communication radio.

Pol Lt Prapas said his patrol team spotted the suspicious motorcycle abandoned on the bridge when they arrived at the scene. They drove past it and later stopped to take a closer look. Suddenly, the bomb was detonated. The force of the explosion left him, his fellow officer and the woman riding her bike behind injured.

Authorities said the licence plates on the motorcycle did not match with the engine registration number.

A further police investigation found the bike was reported stolen in Tak Bai district of the southern province last September and it carried fake licence plates.

Siriporn Srilopian, 53, a native of Sungai Kolok and owner of the stolen bike, was riding to a nearby village in tambon Koh Saton of Tak Bai district when two young men robbed her of the bike on Sept 12.

The woman identified one of the suspected thieves from police files as Zulkifi Mana, of Cho Airong district. A warrant was issued for his arrest at the time. Police believed he might have been involved in Saturday’s attack.

Authorities believe the attack was the work of southern insurgents seeking to target security officers. 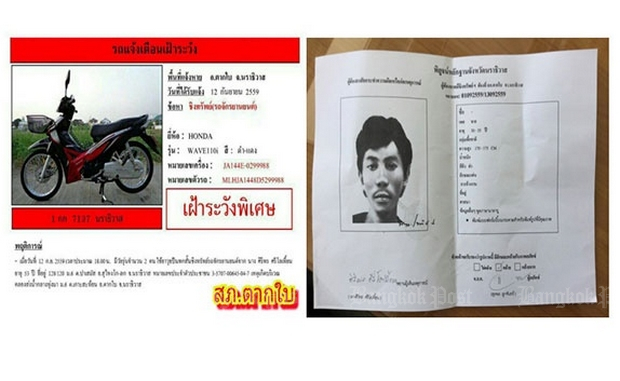 The motorcycle used in Saturday's attack was reported stolen last September and the suspect (right), identified by the owner from police files at the time, is now being sought.

Debris from the motorcycle bomb is scattered across the pavement. (Photo by Waedao Harai)

Narumon Pinyosinwat has resigned from the job of government spokeswoman, further fuelling speculation she will be appointed deputy labour minister in the new cabinet line-up.

A seven-member panel of prosecutors set up to investigate the dismissal of charges against Red Bull scion Vorayuth Yoovidhya in an alleged hit-and-run case in 2012 is set to reveal its findings on Tuesday, Office of the Attorney General deputy spokesman Prayuth Phetkhun said on Monday.