DSI head to US to nab flashy monk
Thailand
General

DSI head to US to nab flashy monk

One of the early revelations about the then-monk Luang Pu Nem Kham was his use of private helicopters and jet planes - while flaunting stacks of US currency. (Bangkok Post file photo)

Thai authorities are en route to the United States to bring back a disgraced ex-monk known as Luang Pu Nen Kham after a California court approved his extradition, said a senior prosecutor.

The ex-monk, 38, whose layman name is Wirapol Sukphol, is wanted by the Department of Special Investigation (DSI) on several charges including money laundering, child abduction and raping a girl aged under 15.

He fled the country in 2013 and authorities initiated a process to seek his extradition following reports that he was granted permanent US residency. He was arrested by US authorities in July last year.

Amnat Chotichai, chief of the International Affairs Department at the Office of the Attorney General, said a team of prosecutors and DSI officials has been dispatched to the US.

The team will escort the ex-monk back to Thailand if he does not appeal the extradition order, he said, noting that as far as he is aware, Mr Wirapol has a few days left to appeal.

The spokesman team of the Office of the Attorney General will keep the public informed of the situation, he said. 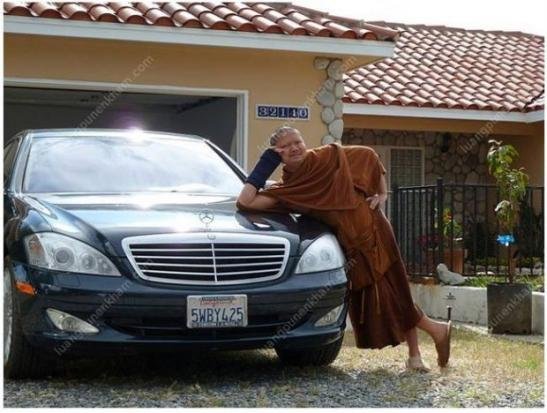 A US judge has approved the extradition of flashy 'Nen Kham', the accused child rapist still posing as a monk and raking in cash in California. He still has the right to appeal the extradition order. (Photo via Facebook)

Commenting on the criminal procedures against the ex-monk, Mr Amnat said the Department of Special Litigation has decided to indict Mr Wirapol and can arrange for his arraignment without delay.

Based on the procedures, Mr Wirapol will be questioned by the DSI when he arrives in Thailand, before his handover to the prosecution.

"The prosecutors have made arrangements and can take him to court promptly. It's up to the Department of Special Litigation to oppose bail," Mr Amnat said, adding his office is responsible for the extradition process only.

Mr Wirapol, known as the jet-setting monk, captured people's attention in 2013 following the release of video clips showing him travelling aboard a private jet as a monk. He carried a Louis Vuitton bag, wore brand-name sunglasses and was found to own more than 100 luxury cars and numerous large plots of land.

He was expelled from the monkhood in absentia for inappropriate conducts including having sex, boasting about supernatural powers and leading a high-flying lifestyle.

The DSI has seized 380 million baht worth of his assets and prosecutors earlier asked the US for cooperation to extradite him in 2016. The prosecution received an investigation report against the ex-monk from the DSI in September 2013.

The 216-page report recommended that he be indicted on four charges related to his alleged sexual conduct with underage girls. In the meantime, the Criminal Court approved the DSI's request for the warrant for his arrest.

In addition to criminal charges, the monk was slapped with a civil lawsuit by the prosecution seeking to have his assets and those of eight others worth 40 million baht seized under the anti-money laundering law. A witness hearing is under way.

According to a September 2015 report from the US, Mr Wirapol opened the five-rai Wat Pa Kanti Baramee in Lake Elsinore near San Diego. He reportedly said he was founding a new Buddhist cult that had nothing to do with Thailand's Sangha and would register it as a foundation.

Commenting on another high-profile extradition case involving Vorayuth "Boss" Yoovidhya, Mr Amnat said police have not yet forwarded a request to the prosecution to pursue him.

He said the prosecution made clear what evidence was required to accompany the extradition request at the latest joint meeting of prosecutors and police. He said he had no idea what was stalling the procedure.

"We will proceed as soon as the request is submitted. We've told them what evidence they should prepare in the joint meeting," he said.

Mr Vorayuth, a Red Bull scion, is the lead suspect in a hit-and-run incident in Bangkok in 2012 which caused the death of a police officer.