Teenager Pattarada "Nong Beam" Kaewpong (right) and her mother at Bang Yi Khan police station to identify their absconded lawyer after his arrest on Monday morning. (Photo by Chanat Katanyu)

Police have arrested a lawyer accused of cheating a young girl of 5 million baht in compensation after a 2005 road accident that left her confined to a wheelchair.

Pisit Sammalert is in police custody, along with his wife, and being questioned over the allegation he stole most of the compensation money due to his crippled client Pattarada "Nong Beam" Kaewpong, who is now 14 years old.

It was reported they were apprehended in the parking lot of a condominium in Soi Ram-Indra 125, in Bangkok's Min Buri district.

Pol Lt Gen Sanit Mahathavorn, chief of the Metropolitan Police Bureau, said the Anti Money Laundering Office (Amlo) will be asked to examine the lawyer’s finances and see if any of his assets can be seized.

He said the suspect claimed to have received 4 million baht from the insurance firm, deducted 500,000 baht for legal fees, and handed the remainder to his wife, Pornpavee Chukaew.

Pol Lt Gen Sanit said police have evidence supporting the allegation against Mr Pisit and were not bothered by the suspect's knowledge of the law. The city police chief enouraged people who are mistreated by their lawyers to file complaints.

He said police were investigating who provided aid and shelter to the suspects, and would take action against them.

"Nong Beam" was left with a crippling spinal injury after a 2005 road accident in Surat Thani in which her father was killed. The family's pickup was hit by an 18-wheel truck.

According to the girl’s mother, Pornthip Chantharat, Mr Pisit contacted the family and offered pro bono legal help. He was authorized to represent the family and get compensation from the truck operator.

In 2014, the lawyer told her the truck operator had agreed to pay 1 million baht in compensation in monthly instalments. The family received 40,000 baht a month for seven months, and then Mr Pisit disappeared.

Ms Pornthip later contacted the truck operator and learned that his company had paid 5 million baht in compensation, which it believed was going to the family.

A complaint was filed against Mr Pisit with Bang Yi Khan district police in Bangkok in 2015.

After the arrest of the lawyer and his wife, Mrs Pornthip said she was still worried whether she would get any of the money they were owed, or not.

“If I get a chance to talk to him, I’d really want to ask him if this was the help he once promised,” she said.

Mr Pisit has been charged with collaboration in falsifying documents and using falsified documents to defraud and embezzle money from a client. 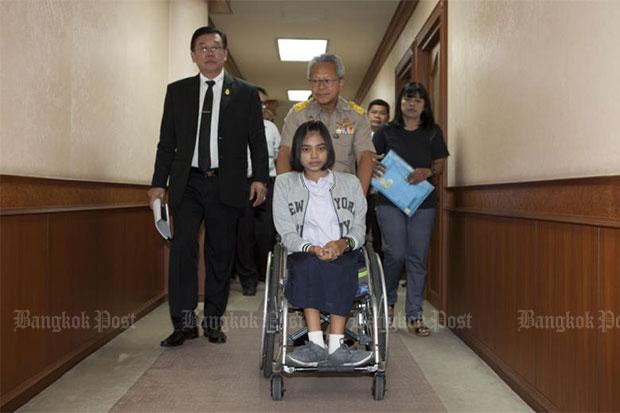 Pattarada "Nong Beam" Kaewpong is taken to meet members of the Thai Bar, who offered to help her, on July 3. (Bangkok Post file photo)