A police officer shows the nylon rope that was tied around the neck of the US citizen found hanged in a condominium room in Pattaya on Monday night. (Photo by Chaiyot Pupattanapong)

CHON BURI - An American businessman was found hanged at a condominium room in Pattaya beach city on Monday night.

The 54-year-old (name withheld pending notification of relatives) was found by his girlfriend hanging from a wardrobe door hinge by a nylon rope around his neck in a 26th floor room at the Unicca Pattaya condominium in tambon Nong Prue, Bang Lamung district.

She reported it to police around 9.30pm. 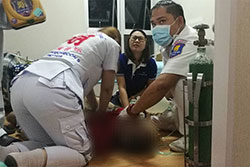 Rescue workers give first aid to the American businessman found hanged inside his condo room in Pattaya, but failed to save his life. (Photo by Chaiyot Pupattanapong)

When rescue workers arrived they found he was still breathing slowly. They immediately gave first aid, but failed to save his life, police said.

Nuengruethai Pakheekit, 31, told police she and her Amercian boyfriend lived together in the room. She returned from work on Monday night, opened the door and was shocked to see him sitting near the wardrobe with a rope around his neck. She immediately called police.

Ms Nuengruethai said he often complained about financial problems with his business overseas, but she never dreamed it would drive him to take his own life.

Thailand should take advantage of the China-Taiwan tensions by inviting companies like Taiwan Semiconductor Manufacturing Company (TSMC) to invest here as Taiwanese semiconductor and electronics companies are expected to relocate their production facilities overseas, says the Federation of Thai Industry (FTI).

Thailand is turning into a battleground for public cloud services among American and Chinese firms with internet giant Google becoming the latest operator to announce a plan to launch its cloud region in the country amid surging demand in the segment.