Police expect to get translated documents to seek the extradition of fugitive Vorayuth Yoovidhya this Friday in the much-delayed proceedings against the Red Bull scion in the fatal hit-and-run case that killed a police officer five years ago, a police source says.

The strategy was revealed Tuesday as the statute of limitations for Mr Vorayuth's failure to help the victim of the crash comes close to expiring, but prosecutors have not received the documents to kick-start the process to retrieve him. 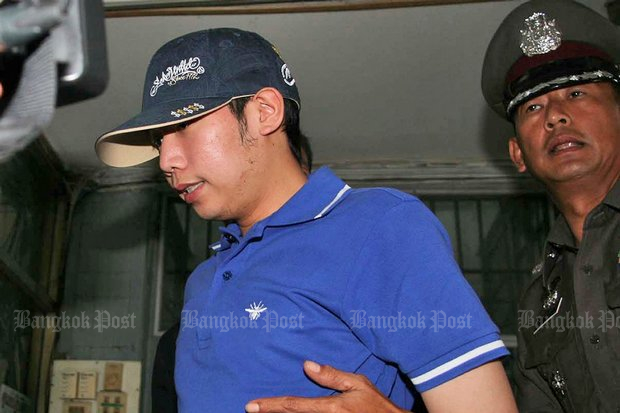 The man who wears dollar signs on his designer cap will escape all prosecution for failure to stop and aid the victim of a crash if he can just drag out the slow police response for 47 more days. (Bangkok Post file photo)

As the incident happened on Sept 3, 2012, the charge will be dropped if Mr Vorayuth, currently living abroad, is not prosecuted before Sept 3 this year.

The one-year statute of limitations of two other charges -- speeding and reckless driving, and causing damage to property -- expired in September 2013.

The case is proceeding slowly as police need time to translate the documents, city police chief Sanit Mahathavorn said Tuesday. It is not clear where police intend to send the documents in the first instance.

"If officers face inconvenience, I will speed up the process myself," he told reporters, promising the job will be done in one or two days.

According to the police source, who asked not to be named, Thong Lor police station has hired a company to translate 34 pages of documents and expects the work to be ready this Friday.

The Red Bull scion is facing two charges -- the other is reckless driving causing death, for which the statute of limitations ends on Sept 3, 2027.