Lt Gen Manas Kongpan before his arrest in May 2015, and during a court appearance. The highest-ranking accused among the 103 defendants, Manas drew a prison term of 27 years. (File photos)

The Criminal Court on Wednesday handed down a lengthy ruling in a major human trafficking trial with 103 accused over their role in the trafficking of Rohingya migrants to jungle camps in the South.

It is believed to be the country's biggest human trafficking case ever tried in court.

By late afternoon the court had convicted 21 people of charges ranging from trafficking to collaboration in organised transnational crime to detention. The court was still reading the ruling at press time last night. 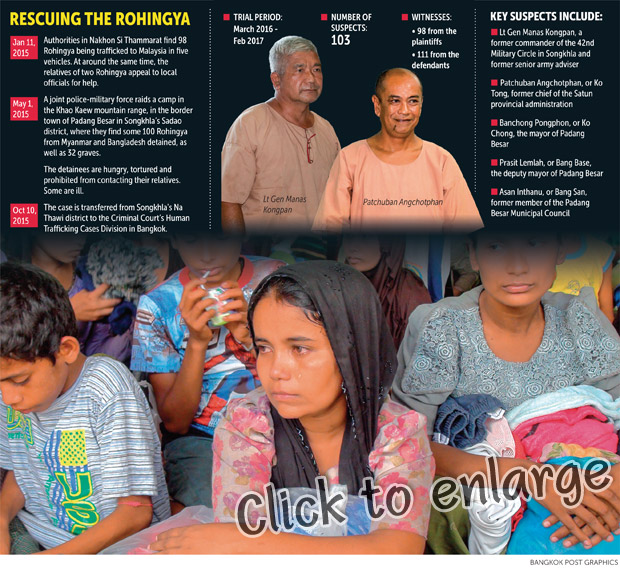 Former army adviser Lt Gen Manas Kongpan was among those found guilty of several offences involving trafficking and taking bribes. He was sentenced to 27 years in prison.

The court said Lt Gen Manas could not prove evidence of claims that he had earned 14 million baht over the past two years from gambling on bullfighting, and receiving legal payments for dealing with the Rohingya migrant problem.

Banchong Pongphon, or Ko Chong, the mayor of Padang Besar, and Patchuban Angchotphan, or Ko Tong, ex-head of Satun provincial administration, were also convicted. Banchong drew a 75-year sentence, while Patchuban was given 78 years.

Legally, prisoners cannot serve more than 50 years no matter how long their sentences.

The defendants were arrested in a massive crackdown following the discovery of more than 30 graves in May, 2015 on top of Khao Kaew mountain in tambon Padang Besar in Songkhla's Sadao district near the Thai-Malaysian border.

The bodies, found close to a makeshift camp, were suspected Rohingya Muslim migrants who were possibly victims of human trafficking.

Among the key defendants were Lt Gen Manas, ex-commander of the 42nd Military Circle in Songkhla, accused of trafficking humans, helping foreigners enter the country illegally, detaining victims of human trafficking and demanding a ransom; Mr Banchong; and Mr Patchuban.

The case came under the media spotlight, putting pressure on the government already under close watch by the international community for its inefficiency in combating human trafficking.

The court spent more than 10 hours reading out a 500-page document detailing the defendants' crimes amid tight security.

The ruling started at 8.30am while friends and families of the defendants started arriving as early as 6am.

In its ruling, the court found there was insufficient food and water at the camp where the detainees were kept. The detainees were not allowed to use phones and were threatened if they tried to contact anyone.

According to the court, the defendants who were local officials, including Mr Banchong, were involved in labour procurement and their activities involved trafficking of people and involvement in cross-border crime syndicates.

The court also found that another group of defendants responsible for providing transportation and securing routes were part of the trafficking network even though they claimed they did not know they were transporting people.

The court cited the records of their mobile use as evidence to implicate them.

The suspects were indicted in July 2015 on 16 counts of violating the 2008 Anti-Trafficking in Persons Act, the 2003 Suppression of Participation in Transnational Networked Criminal Organisation Act, the immigration law and the Criminal Code.

Following the indictment, the defendants pleaded not guilty and none were granted bail throughout the trial which concluded in February this year.

The trial was moved from Na Thawi court in the South to the Criminal Court's newly established human trafficking division.

One of the defendants, Sureeya Ahamad, died during a trial which included 116 hearings, and 200 witnesses.

Some of the defendants' witnesses were granted permission to give testimony behind closed doors as their statements concerned national security.

The defendants were asked to submit their closing statements within 30 days of the last hearing in February as the court set July 19 for its ruling.

Only the defendants and their lawyers and correction officials were allowed in the room where the ruling was read out. Families and friends and the media were put in separate rooms for security reasons.

The proceedings were relayed on television screens provided by the court.

More than 60 police from the Crime Suppression Division (CSD) were deployed in the court's compound to step up security.

Prime Minister Prayut Chan-o-cha called on the people not to blame military figures for the trafficking, saying Lt Gen Manas was just one part of the network.

He said the media seemed to focus attention on military personnel.

"There are many people in this human trafficking network," Gen Prayut told reporters. "Don't group all soldiers in the country as one."

Pol Maj Gen Chalong Phakpinyo, deputy commissioner of Provincial Police 9, said police are still working on the human trafficking case and tracking down suspects who are wanted on another 45 warrants.

He said several suspects are foreigners believed to have fled the country.

He said the bureau has been working closely with Malaysian authorities in fighting human trafficking through exchanges of information.